It’s a pay per view weekend and that means a grand total of very little on this show as Crown Jewel has no connection to NXT. LVL Up doesn’t have much to offer most weeks but maybe we can get in a nice match to take up some of the time. The show is usually at least decent so let’s get to it.

The fans approve of Nile as she works on the wristlock to start. Ruca trips her down and Nile actually grins a bit, only to have it cut off by Ruca’s headlock takeover. Nile is back up with a sunset flip but a jumpless X Factor gives Ruca two. A rather muscular deadlift suplex gets two on Nile but she is back with an armbar in the corner. The arm is fine enough to hit a side slam and a flipping splash connects on Nile in the corner. Nile isn’t having that and suplexes her over, setting up the Diamond Chain Lock (dragon sleeper) for the tap at 4:55.

Myles Borne is ready for Hank Walker, who he seems to like.

Borne takes him down by the arm to start as we hear about these two knowing each other as teenagers. A Pounce (with a Monty Brown reference from commentary) sends Borne outside but he comes back in to forearm in the corner. The armbar has Walker down but he gets a boot up to stop a diving something designed to land on a raised boot. The comeback is on but Borne snaps off a northern lights suplex. Back up and Walker runs him over with a flying shoulder for the pin at 4:16.

Quinn powers him up against the rope to start but gets armdragged into an armbar. That works so well that Mensah does it again but Quinn hits him in the back. Mensah is fine enough to send him outside for the slingshot dive but Quinn stays on the back with some rams into the apron. A backbreaker and knee to the back give Quinn two, followed by a swinging neckbreaker for the same. The bearhug stays on the back but Mensah breaks it up and hits a springboard moonsault press. Mensah’s running spinwheel kick in the corner finishes Quinn off at 6:07. 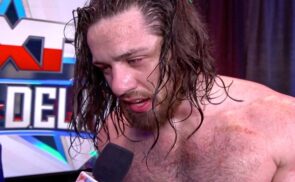