We’re done with Crown Jewel and now it is time to get ready for Survivor Series. There weren’t many developments this weekend but we get to find out where some of these stories are going on the way to WarGames. I’m curious to see who is going inside the cage and maybe we find some of that out this week. Let’s get to it.

Here are the Usos and Solo Sikoa to get things going. We see a photo of the Bloodline celebrating at the end of Crown Jewel with the Usos promising to beat New Day for the titles on Smackdown. Cue New Day to interrupt with Xavier Woods promising to get the titles back on Friday. The Usos praise New Day’s history and there’s nothing wrong with being the #2s.

Woods calls out the Usos for being coddled in a famous wrestling family, which sends Jey into a rant about the pressure that comes with being part of a legendary family. Woods rants right back about what it means to have pressure, because New Day knows what it’s like to sit in catering, wondering if you’re getting fired or building a YouTube channel so someone will notice you at work. Jimmy brings up breaking Woods’ crown before Jey says there would have been no Kofimania without the Usos forfeiting in the gauntlet match.

Kofi’s kids wouldn’t be running around the ring at Wrestlemania so stay at home with them on Friday. Kofi talks about how much the record means to New Day and they’re going to fight to keep it like no other. Cue Matt Riddle, with bongos, to interrupt and this better be good. Riddle offers New Day a hit of the bong, which they accept, but Jimmy is the only Bloodline interested. Jey isn’t impressed though so let’s have a six man tag.

Riddle suplexes Jimmy to start and it’s time for the Unicorn Stampede. Woods comes in to work on the arm but Jey enziguris Riddle. Sikoa takes Riddle down in a crash to the floor and we take a break. Back with the Usos hitting a double spinebuster on Riddle and Sikoa kicks him in the ribs. Riddle manages a quick suplex and jumping knee to Sikoa, allowing the tag to Woods to pick up the pace. A basement clothesline and splash get two on Sikoa, followed by a high crossbody to put him down again.

There’s the Boom Drop but Trouble In Paradise is broken up. New Day gets taken outside for some rammings into the announcers’ table as we take a break. Back with Sikoa countering a sunset flip with a legdrop but he runs into a raised boot in the corner. A tornado DDT gets Kofi out of trouble and it’s a double tag to Jey and Riddle.

House is cleaned with a pair of Brotons and a powerbomb to Jimmy. Jey is back up with a pop up neckbreaker for two on Riddle, who pulls him into a triangle choke. Jimmy makes the save with a Superfly Splash for two, with Kofi breaking it up as well. Kofi’s dive to the floor is up off but Riddle is back up with a Floating Bro to Sikoa on the floor.

Jimmy dives onto Riddle and knocks the top of the announcers’ table off in the process. Back in and Riddle catches Jimmy with a kick, setting up the hanging DDT. Sikoa tags himself in as Riddle hits the RKO on Jimmy, leaving Sikoa to come in for a Spinning Solo and the pin on Riddle at 20:52.

Here is JBL to mock Pennsylvania for losing the World Series to a team from Texas before interrupting Baron Corbin.

JBL is on commentary. Corbin knocks Alexander around without much trouble and more hard shots have him down again. Alexander manages a Neuralizer to send him to the floor but Corbin is right back in with the End of Days for the pin at 2:18.

Here is Seth Rollins for the United States Title Open Challenge. Cue the Judgment Day and Rollins is more than a bit confused. Finn Balor gets in the ring to say that Rollins once cost him gold so now he is costing Rollins gold. Cue the OC to interrupt for the staredown, with Rollins slipping away. Styles says this isn’t over because there is always the Rhea Ripley Problem. They still haven’t found anyone, but someone found the OC. We hear a fight on the floor and….Mia Yim is back! Ripley is down and the big beatdown is on with the OC (and/with Yim) standing tall.

Chad Gable is here with Otis. Elias’ shoulder doesn’t work to start and Otis knocks him hard into the corner. An attempt at a slam doesn’t work for Elias but he avoids a charge into the post. Back to back jumping knees to the face drop Otis but Elias has to knock Gable down. Otis uses the distraction to hit the World’s Strongest Slam for the pin at 2:59.

Judgment Day isn’t worried about Mia Yim because she solves NOTHING. The team goes to leave when Rhea Ripley runs into Bianca Belair for some sneering.

Here are Bianca Belair, Asuka and Alexa Bliss for a chat, but first we see a clip of the three of them almost getting into a fight with Damage Ctrl in the parking lot earlier today. They aren’t impressed but here is Damage Ctrl to interrupt. Dakota Kai said Bianca Belair still hasn’t beaten Bayley but Asuka rants in Japanese.

Sky yells right back and the argument is on. Sky: “B****!” The big fight is on until Bianca says this is WAR, so this is ending at WARGAMES. Cue Nikki Cross to jump Belair form behind and the big brawl is back on. Damage Ctrl and Cross beat them down, with Bayley saying she’ll see Bianca at WarGames.

This is the result of Theory not wanting Benjamin’s advice earlier today. Feeling out process to start with Benjamin blocking a ram into the corner. Theory punches him down but gets pulled into the ankle lock. That’s broken up so Benjamin snaps off a German suplex for two. Back up and a rake to the eyes slows Benjamin down, setting up A Town Down for the pin at 2:43.

Here is Miz for a chat before his match with Johnny Gargano. Miz rants about how Gargano’s video about his relationship with Dexter Lumis is false. He can’t believe that anyone would believe those sources, but his own father believes Gargano! Miz has been in discussions for a film version of the REAL story but here is Gargano to interrupt. Before the match, Gargano needs to tell the truth and blow the whistle on himself.

When he did his interview last week, he wanted Miz to tell the truth and actually pay Dexter Lumis, but that didn’t happen. Therefore, he needed some extra evidence and he did something a little deceitful to get it. Gargano hired someone to do it, and it turns out that the producer Miz met with over the movie was a private investigator….and she had a hidden camera on. Miz looks terrified as Gargano pulls out a universal remote to run the Titantron, which shows Miz telling the investigator that everything Gargano said is true.

Miz quit paying because Lumis went nuts, but since it went under, why should Lumis be paid? If nothing else, Lumis should be paying him since he wasn’t doing anything three months ago. Miz looks near tears as we’re ready to go.

Gargano starts fast by dropkicking him to the floor and hitting the running kick from the apron. Some chops on the floor has Miz in trouble and Gargano holds the ropes to avoid a dropkick back inside. Gargano goes after the arm but Miz is back with a kick to the ribs to slow him down. A running kick to the chest gives Miz two and we hit the chinlock.

Back up and Gargano hits what might be a low blow, setting up a jumping neckbreaker for two. A superkick knocks Miz off the apron and there’s the slingshot dive to drop him again. Miz is fine enough to drop him over the barricade though and we take a break. Back with Gargano hitting a Backstabber out of the corner for a double knockdown. Gargano faceplants him for two but Miz left hands him on the apron.

The slingshot spear gives Gargano two but Miz’s short DDT gets the same. The Skull Crushing Finale is countered into a rollup for two, followed by a kick to the head for two more. There’s a suicide dive to send Miz into the announcers’ table but Miz is pulled underneath the ring. He comes out with a turnbuckle rod and tells the referee to check, allowing Miz to hit Gargano with a turnbuckle rod for the pin at 15:50.

Post match Lumis comes out to chair Miz down and have a glaring seat.

Damage Ctrl recruits Nikki Ash for WarGames. She laughs and says it’s time to play, which seems to be a yes.

Dana is defending and Damage Ctrl is here, with Bayley on commentary. Nikki wastes no time in taking her down for a cross arm choke before ramming her face first into the mat. The Purge gives Nikki the pin and the title at 2:01.

Post break, Damage Ctrl and Cross are walking through the back, where Nikki throws the 24/7 Title in the trash.

The OC officially welcomes Mia Yim to the team and she is ready to pick up the tab tonight. Then she’ll deal with Rhea Ripley.

Here is Seth Rollins to issue the open challenge again. First though, he brings up ten years of Rollins in WWE, earning himself a nice chant. With that out of the way, he’ll need an opponent, so here is Mustafa Ali on the Titantron. Bobby Lashley jumps him from behind, talks about wanting revenge on Seth, beats up Ali for trying to accept the challenge again, and then promises to take the title back.

Rollins is defending and gets clotheslined over the top before the bell. The brawl is on with Rollins cutting off the spear through the barricade with a superkick. Lashley is back up to hammer away and Rollins gets posted hard. There’s the spinebuster through the announcers’ table and Rollins is left laying with no match.

Post match Lashley leaves…..and here is Austin Theory with the briefcase? Post break we have a cash in and it counts.

Theory is challenging and hits Rollins in the face for two. Rollins is back with an attempt at a Pedigree but gets reversed into one of his own for two. Theory gets knocked outside but rolls back in for a powerbomb and a near fall but the Stomp is countered into A Town Down….and Bobby Lashley pulls the referee out at two. After yelling at Lashley that he ruined it, Theory gets wrecked and posted hard a few times. The Hurt Lock leaves Theory out cold on the floor and Lashley leaves. Theory beats the count back in but gets Stomped to retain Rollins’ title at 4:58. 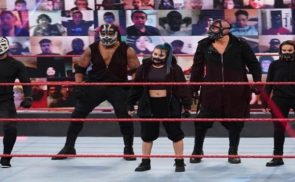