You never want to see that. There are only a few ways for a wrestler to lose a title and some of them are a bit different than others. While the most common way is for a champion to lose a match, there are other instances where a title changes hands without a loss. Unfortunately that is the case again, but this time also has a bit of a twist on the concept.

This week on AEW Dynamite, AEW Women’s Champion Thunder Rosa announced that she is injured and therefore unable to defend the Women’s Title. As a result, an Interim Women’s World Champion is being crowned at All Out in a fatal four way involving Toni Storm, Britt Baker, Jamie Hayter and Hikaru Shida. It is not clear when Rosa was injured or how long she will be out of action.

Opinion: I really could go for less of these Interim Title matches. If there is a reason to not just strip Rosa of the title and move on to a new champion with Rosa getting a title match when she’s back, I don’t know what it is. That being said, Rosa’s health is what matters mots here and hopefully she is back in the ring a lot sooner than later, because you never want to see someone get injured.

What do you see winning the title? Who do you want to see as champion? Let us know in the comments below. 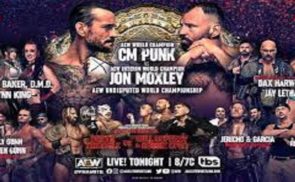