It’s time for more interchangeable cruiserweight action as the same people get to have mostly the same matches as they always do around here. Hopefully the action is good, because that is about all that happens to make things interesting on this show. I wouldn’t bet on it though, as I learned not to do a long time ago. Let’s get to it.

The Boyz manage to get Phillips, now with a beard, to dance a bit. Commentary points out that we’ve seen this match before. Daivari hammers away on Samir to start and sends him arm first into the buckle. A cobra clutch puts Samir down and it’s off to Nese for the quickly broken chinlock. Instead, Daivari comes back in to drop some elbows but Samir manages a tornado DDT.

Nese is smart enough to break up the hot tag though and comes back in for two off a snap suplex. A chinlock with a bodyscissors keeps Samir in trouble but he fights up again. This time Nese’s suplex is countered into a neckbreaker and the hot tag brings in Sunil to pick up the pace. A middle rope clothesline gets two on Daivari and the middle rope Hart Attack (elbow instead of clothesline) gets the same. The Bollywood Blast gets another near fall with Daivari having to make a save. Nese hits a pair of Running Neses for the pin on Sunil at 8:16.

We look at Kushida issuing an open challenge for a Cruiserweight Title shot and retaining over Oney Lorcan on NXT. Post match, MSK had to save Kushida from a Legado del Fantasma beatdown, setting up a six man next week.

Grey spins out of a wristlock to start but can’t get an O’Connor roll. Adonis sweeps the leg and elbows him in the jaw to send Grey into the corner. Grey is right back with an armdrag into an armbar but Adonis makes the rope. Not to waste a chance, Adonis pulls him throat first into the rope to take over. Some elbows set up a missed knee drop but Adonis pulls him right back down into the chinlock.

What looks like a Captain’s Hook is countered so Adonis snaps off a belly to back suplex for two. Cue Ariya Daivari to watch from ringside as Grey hits a running elbow to the face. A bulldog drops Adonis again and the spinning high crossbody connects for no cover. Instead they both crash to the floor, with Daivari telling Grey to take the countout win. That isn’t happening but the distraction lets Adonis hit the Long Kiss Goodnight for the pin at 9:14.

Post match Daivari yells at him for not using his head. Grey says he’s doing it his way. 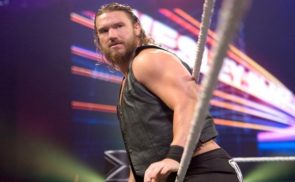