We’re officially in an all new era as Vince McMahon is completely gone and HHH is now in charge of creative. That may sound very interesting on paper but I would give it another week before you see any major changes. There might be some surprises here and there this week though as it’s the go home show for Summerslam. Let’s get to it.

We open with Miz and Logan Paul mid-brawl in the ring with referees having to break it up.

With that out of the way, here is the Bloodline for a chat. Roman Reigns gets to the point by having the Garden acknowledge him before handing it off to Paul Heyman. After the mic goes out (Heyman: “We have a sound guy that must be from New Jersey or something. We want your name written down. You’re the next one out the door.”), we hear about everything Brock Lesnar has done over the years.

Lesnar has ruined a lot of things over the years, including the Streak, but he won’t do that on Saturday when Roman Reigns nears 700 days as Universal Champion. Reigns is tired of hearing about Lesnar every time you mention his name so it is time to send Lesnar back to Canada to slaughter a bunch of hogs. Heyman explains the concept of Last Man Standing, which is how Reigns is finally going to get rid of Lesnar once and for all.

Now cue Theory with the briefcase, but Reigns says that if you’re going to come out here, get in the ring and acknowledge the Tribal Chief. Theory stares Reigns down, but Reigns says that Theory’s daddy isn’t here to protect him anymore. Fans: “WHO’S YOUR DADDY?” Reigns says it’s going to be him if Theory doesn’t mind himself. The Bloodline goes to leave but Jimmy Uso taps Theory on the neck. A briefcase shot to the back…actually doesn’t get any reaction from Jimmy, as the Bloodline leaves in peace.

Post break Theory is still in the ring but Drew McIntyre cuts him off.

McIntyre starts fast and hammers away with the power but gets caught with a jawbreaker. Theory gets to stomp away in the corner until McIntyre blasts him with a clothesline. Futureshock connects but Theory rolls outside before the Claymore can launch. That’s cool with McIntyre, who drops him chest first across the announcers’ table as we take a break.

Back with Theory sending him outside and then whipping him hard into the steps. Back in and McIntyre reverses a suplex into one of his own before winning the slugout. The Claymore is loaded up again but here are the Brawling Brutes to jump McIntyre for the DQ at 9:37.

Result: Drew McIntyre b. Theory via DQ when the Brawling Brutes interfered (9:37)

Post match the beatdown is on until Bobby Lashley makes the save. Theory has to bail before he gets wrecked as well.

Joined in progress with Lashley beating on Theory before handing it off to McIntyre. A cheap shot from behind puts McIntyre down though and it’s Sheamus coming in to choke away in the corner. The Irish Curse plants McIntyre and Sheamus hammers away but he won’t tag Theory back in.

That’s enough for McIntyre to get in the Glasgow Kiss and bring Lashley back in. Sheamus gets suplexed and knocked outside, where Lashley’s spear to Theory is cut off by Sheamus’ knee. Butch gets in the ring for a distraction so Ridge Holland can go after McIntyre. That’s fine with McIntyre, who suplexes Butch onto Holland, earning the Brutes an ejection and we take a break.

Back with Lashley fighting out of a chinlock but getting knocked down again so Sheamus can come back in. Lashley spinebusters his way to freedom and the hot tag brings in McIntyre to clean house. A Sky High gets two on Theory but McIntyre gets low bridged to the floor, leaving Lashley to hit the big spinebuster on Theory. Sheamus breaks up the cover with a top rope knee so McIntyre takes him outside. The fight is on until Sheamus hits the White Noise on the floor. Theory is back up but cue Dolph Ziggler for a distraction so Lashley can grab the Hurt Lock for the tap at 12:20.

Post match Theory goes up the ramp but gets superkicked by the Usos. Roman Reigns comes back out to hand Theory his briefcase.

We look back at 20 years of Rey Mysterio in WWE.

Rey arrived with his wife and kids earlier tonight.

Dolph Ziggler says he wants Theory to back up his potential. AJ Styles comes in to say he likes that idea but here is the Alpha Academy to interrupt. A tag match is set up.

Here is Rey Mysterio, with Dominik, for the 20th anniversary celebration. Rey talks about having his first match in Mexico at 14 years old and now here he is. Rey can’t believe he made it here after making all kinds of legendary rivalries. As a smaller guy and a proud Latino, he became World Champion at Wrestlemania XXII and made a lot of friends along the way.

Rey thanks Dean Malenko, Konnan, Batista, Kurt Angle and Edge, but then there is Eddie Guerrero. He thanks Eddie for always watching over him and feels truly humble for all of the support he has received for the last twenty years. Rey also thanks his family (watching backstage along with some friends) and Dominik in particular but finally he needs to thank the fans. We get some thank you’s in Spanish but here is Judgment Day through the crowd for their scheduled match.

Joined in progress with Dominik taking over on Balor before sending him into the corner for right hands from Rey. We get the Eddie dance in the corner as Rey hammers away, only to get sent face first into the buckle. Priest comes in for the hard whip into the corner and the toss suplex gets one.

It’s back to Balor for the chinlock but Rey pops u for a quick escape. Dominik comes back in to clean house, including a dropkick to put Balor on the floor. Priest cuts off Dominik’s dove and sends him into the barricade as we take a break. Back with Dominik hitting a reverse Sling Blade and bringing Rey back in for a kick to Priest’s head.

A top rope seated sent on gets two on Priest, who boots Rey down for two of his own. It’s back to Balor, who has to avoid the 619 and hit the Coup de Grace for two as Dominik saves. With nothing else working, Balor tries the Eddie Guerrero chair trick but Rey does the same thing right back. A double 619 sets up the frog splash to finish Balor at 11:29.

We look at Cody Rhodes winning the ESPY Award for WWE Moment of the Year.

The Mysterios join their family and friends backstage with drinks being poured. Rey also gets what looks like his gear from Halloween Havoc 1997. Rhea Ripley comes in and pie faces Rey’s daughter, meaning it’s Judgment Day coming in to beat Rey down (Balor: “It’s not your anniversary. It’s my birthday!”), including Priest powerbombing him onto a table.

Here is Bianca Belair for a chat, but first we see how her match with Becky Lynch at Summerslam. Cue Becky but Belair cuts her off with the EST names. Becky decks her and the brawl is on with referees having to break it up.

Alexa Bliss is ready for Doudrop tonight and then is coming for the title.

Rey Mysterio is pretty banged up but Dominik has to chase off Judgment Day. The distraction lets Rhea kick Rey in his bad arm.

Nikki Ash is here with Doudrop and her distraction lets Doudrop hit a running crossbody for an early two. The chinlock goes on to keep Bliss in trouble but she fights up and kicks away. A running basement dropkick gives Bliss two but she has to avoid a charge in the corner. Doudrop is favoring her shoulder so the referee checks on her, allowing Ash to shove Bliss off the top. Not that it matters as Bliss grabs a tornado DDT for the pin at 4:19.

AJ Styles tells Logan Paul that he doesn’t know much about him, but if Paul doesn’t like Miz, AJ must like him.

It’s time for the debut of Logan Paul’s Impaulsive TV and he gets straight to the point by calling Miz out. An insult to the size of Miz’s testicular fortitude, here is Maryse to answer instead. Maryse can’t pronounce genitalia but she does have some statistics about average size. Paul: “Who measures their testicles?” Cue Miz to say he does, as does every single man in this arena. Miz yells about how he gave Paul everything and now Paul is ruining it. Paul says Maryse has a bigger set than Miz and the brawl is on, with Ciampa running in to help beat Paul down. The Skull Crushing Finale drops Paul.

The Street Profits and the Usos have a staredown with Jeff Jarrett in the middle. Trash is talked but Jarrett says he wants peace kept tonight, because he’ll remember it on Saturday.

Before the match, Chad Gable praises himself and mocks Styles and Ziggler as a thrown together team. Like the New York Knicks! AJ starts fast with the drop down into the dropkick to send Gable outside. There’s the big slingshot dive and we take a break. Back with Otis running over AJ, who manages to slip over for the tag to Ziggler. That’s fine with Otis, who drops Ziggler with a hard elbow to the face. Gable comes in and misses the moonsault, allowing Ziggler to hit the superkick. Everything breaks down and AJ knocks Gable into a Zig Zag for the pin at 7:26.

Dawkins takes Jimmy down to start and hands it off to Ford. Jimmy pulls Ford into the corner for some choking from Jey and Reigns but Ford is fine enough to grab the arm. Riddle comes in for the rapid fire kicks and the Usos are sent outside, with Ford hitting the big flip dive.

We take a break and come back with Riddle getting stomped in the wrong corner, including some from Reigns himself. Reigns cranks on the arm and hands it back to Jimmy, who misses a splash in the corner. That’s enough for the tag to Ford, who starts the house cleaning with some kicks to the head. Reigns comes in off a blind tag though and a release Rock Bottom plants Ford hard for two. Ford got busted open somewhere in there and the Usos make it worse with something like a top rope Demolition Decapitator.

We take another break and come back with Ford managing to knock Reigns down. Riddle gets the tag to clean house and everything breaks down in a hurry. That includes a bunch of moves with the word Bro, including the springboard Floating Bro to the floor. Reigns tags himself back in and drops Riddle for two, with Ford making the save. Jimmy hits a big dive onto Ford on the floor but Dawkins takes him out. Riddle hits the hanging DDT on Reigns but the RKO is shoved off, allowing Reigns to hit the spear for the pin at 19:25.

Post match here is Seth Rollings to give Riddle a Stomp onto the steps to end the show. 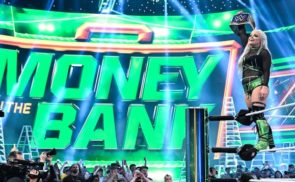