They’re making this a habit. AEW has a lot of wrestlers but a rather limited amount of television time. The company only had three hours a week between Dynamite and Rampage, which doesn’t leave much time for everyone to get out there. It can be smart to mix it up a little bit and take things outside of the arena for some flavor, and that is what some wrestlers have been doing.

Earlier this month, AEW ran an angle at an autograph signing where Brodie King attacked Darby Allin. They ran a similar angle this weekend, where the entire House Of Black attacked Allin during a panel at the San Diego Comic Con. King and Aleister Black both jumped Allin and laid him on a table. This comes after the two sides, with Sting backing Allin up, have faced off on recent editions of AEW TV.

It was a different way to go. Check out the House of Black’s latest assault on Allin:

Opinion: I could go for more of something like this, as Allin has been decimated multiples now, but not in the way that you usually see something like this happen. It gives you the feeling that you might be seeing something anywhere you go rather than in the confines of an arena. Mixing it up like this is a good thing and AEW is rather smart to do things like this every so often.

What did you think of the attack? How will the eventual matches go? Let us know in the comments below. 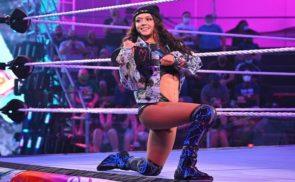 Two Of A Kind? Rather Odd Pairing Makes Debut At NXT Live Event