WWE Smackdown Women’s Champion Liv Morgan was recently interviewed by Bleacher Report where she discussed a number of topics. Among them were winning the championship, the turning point in her career, and her future goals, including being in the main event of WrestleMania.

On winning the Smackdown Women’s Championship:

“That whole day was make or break for me,” she said. “I felt professionally in that moment that if I don’t do this for my fans, I dropped the ball. That’s how I was feeling, so I took it very seriously and felt I had no choice but to win. Heading into the match, I was thinking, ‘OK,’ but as soon as I walked through and heard the crowd, it struck a chord with me for some reason and thought, ‘They want me to win this so bad.’

“It made me emotional. In that moment, I said, ‘I’m doing it. There’s no way I’m leaving this match without that briefcase in my hands.’ It was a very overwhelming feeling where I was trying to compose myself. It gave me so much energy that it broke me.”

On the turning point in her career:

“I’m a big believer in the universe and everything happening for a reason, and I 100 percent thought last year was my time and I thought it was my moment,” she said. “Fast-forward to this year, there’s no doubt in my mind that Money in the Bank was mine. I cut this promo leading into Money in the Bank last year that didn’t air on TV telling the crowd how excited and ready I was…and they broke out in ‘You deserve it’ chants.

“I’m just standing there at the top of the ramp and looking out in the crowd. As far as a time that was most memorable, I knew I had their support. I felt their support with every fiber of my being and I thought that was it. That was the start of it all, having more confidence and growing and evolving.” 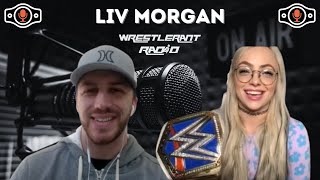 On her future goals:

“I’ve love to main-event WrestleMania, I’ll just throw that out there,” Morgan said. “I think Liv Morgan vs. Bianca Belair would be amazing. I think it’d be phenomenal, maybe Survivor Series. I think it’d be one of those cool babyface vs. babyface matches where hopefully the crowd is 50/50 and excited and high-energy the entire time. We have amazing chemistry and know each other very well. I think we’d put on an incredible show-stealing performance.”

She also discusses her presence on social media, giving more opportunities to others in WWE and more.