It’s the go home show for Super ShowDown but since WWE doesn’t get the idea of slowing down on anything, we are also building towards Elimination Chamber and Wrestlemania at the same time. Brock Lesnar is in the house tonight and that could mean some interesting things for Drew McIntyre and Ricochet. Let’s get to it.

We open with a look back at Randy Orton destroying Matt Hardy last week.

Here’s Orton for a chat. He needs to apologize for going a little too far, but he also mentions that it has been fifteen years since Raw has been in Winnipeg. Fifteen years ago, he was 24 years old and the Intercontinental Champion, but on that night he was punched in the face by someone named Adam, who you may know as Edge. The fans want Edge but Orton makes it clear that he isn’t here tonight. These people will never understand why he did what he did, but he is sorry for it.

Cue Kevin Owens, who first has to pause while the fans chant for him. Owens has been dealing with some delusional people as of late and now Orton is here as well. See, he doesn’t believe that Orton is telling the truth and now Owens wants to know why Orton attacked Edge.

Owens remembers when Edge retired because he was already wrestling for a living. Then in the Royal Rumble, he heard Edge’s music and wanted to be out there with him because he saw the look in Edge’s eyes. So why did Orton do what he did. Orton: “You think you know me?” Owens knows the people want to see them fight so Orton agrees, but a little later.

Angel Garza and Zelina Vega are ready to take out the trash that is Humberto Carrillo. Vega can’t get away from Charly Caruso fast enough but Andrade kisses her hand and says with Charly, business is always pleasure. She seems to approve.

They start wacky by tying their legs together, standing on their heads, and slapping each other in the face. Garza gets sent outside but comes back in with a headscissors, only to have Carrillo land on his feet. Carrillo sends him outside again for a heck of a suicide dive and we take a break. Back with Garza tying him in the Tree of Woe, allowing Garza to TAKE OFF HIS PANTS!

Carrillo fights back and sends him to the floor, only to do a handstand on the apron for some reason, allowing Garza to hit a superkick. An exchange of kicks on the apron puts Garza down and Carrillo stomps away for a bonus. A catapult sends Garza onto the middle rope for the moonsault to the floor and we take a second break.

Back again with Carrillo grabbing a standing Spanish Fly for two but Vega offers a distraction. Garza catches him on top and that means a super Spanish Fly for two. A pinfall reversal sequence gets several near falls apiece until Garza sits down on a rollup attempt for the pin at 14:41 (he might have had the tights but it’s not clear).

Ricochet starts moving fast to start and sends Gallows to the floor for the big flip dive. Back in and Ricochet springboards into a big boot as we see Paul Heyman watching. An uppercut gives Gallows two and we hit the chinlock. Ricochet fights out in a hurry and hits an enziguri for the double knockdown. The springboard crossbody into the standing shooting star gets two but Gallows is back with a superkick. Ricochet hits his own though and the Recoil connects, setting up a shooting star press (to the middle of the ring) for the pin at 4:31.

Post break, AJ Styles talks about how the OC needs to act like the best team in the world. Ricochet could become WWE Champion but if that miracle happens, AJ will be right there to get his title back. They need to plant their flag at the top of the food chain but here’s Aleister Black on the way to the ring. AJ says Black needs to learn what matters around here and they beat Black down. The team leaves and Black pulls himself to his feet.

Here are Brock Lesnar and Paul Heyman for a chat. The Canadian fans are happy to see their honorary Lesnar but Heyman cuts them off with his usual introduction. Heyman talks about how wrestlers are always trying to make catchphrases for themselves but Lesnar has never needed one. All Lesnar has to do is decide to be champion and no one can stop him. Lesnar getting in the ring is special and that’s what you’ll be seeing on Thursday at Super ShowDown. He owes Ricochet an uppercut and since Lesnar is wrestling, it is special by definition.

The stakes on Thursday have never been higher though, but why is that the case? If Ricochet can pull off the miracle, he is going on to face Drew McIntyre at Wrestlemania and the consequences are huge, if that happens. Heyman: “If my aunt had balls, she would be my uncle, but she is not!” (that one cracked Lawler up). Lesnar is going to wreck McIntyre at Wrestlemania and be champion forever. And that is a spoiler.

We look at Becky Lynch calling out Shayna Baszler.

Despite getting beaten up, Black can still do his full entrance. Black is still staggered so Rowan runs him over and drives some knees into the back. A suplex doesn’t work for Rowan as he gets low bridged to the floor, followed by a big boot to knock him off the apron. Black gets knocked onto the apron and then sent into the timekeeper’s area and we take a break.

Back with Black getting Side Effected for two but he strikes away and sweeps the leg. There’s the springboard moonsault press and a running knee to the face gives Black two. Black might be limping a bit after the moonsault and Black Mass is countered into a Jackhammer for two more. Rowan sends him outside to whip Black into the barricade but a charge into the steps knocks the cage over. That’s fine with Rowan, who powerbombs Black into the post but then goes to check on the cage, allowing Black to hit Black Mass. Another one finishes Rowan at 10:24.

We get a sitdown interview with Drew McIntyre, who isn’t scared about Brock Lesnar because he’s main eventing Wrestlemania. Drew talks about debuting in 2009 (which he says was thirteen years ago) and how he hasn’t won a single World Title since that time. He lost his passion, which included his time in 3MB. Then he got fired and it put a chip on his shoulder, but he knew he could only blame himself. He wasn’t about to let people remember him as the idiot playing air guitar.

When McIntyre came back, he came back to NXT, which was where he could be a leader. Then he debuted on Raw in 2018, four years to the day since he was released. He’s been called the future but then he was a past superstar without ever being the present. That’s why he knew he had to eliminate Lesnar and now he’s going to Wrestlemania to fulfill his destiny. They’re doing everything they can to make McIntyre into a star and it’s slowly working.

Lashley stomps away and sends him outside as the fans chant for Rusev. Back in and Truth uses John Cena’s finishing sequence but gets speared down for the pin at 1:53.

Styles vs. Black is confirmed for next week.

All six women’s Elimination Chamber participants, save for Baszler, are in the ring for a contract signing. Asuka counts the participants but realizes there’s one missing. Lawler continues anyway, with Sarah Logan, Natalya, Liv Morgan, Ruby Riott (who nearly comes to blows with Morgan) and Asuka all sign, which draws out Baszler through the crowd.

Lawler wisely leaves as Shayna and Natalya are about to fight, but Asuka breaks it up.  Asuka tells Shayna to bite her but Natalya takes Asuka down and the fight is on, with Liv diving over the table to get at Riott. Shayna is eventually left alone so here’s Becky to take her down. Officials break it up in a hurry.

The Bella Twins are official for the Hall of Fame.

Here are the Street Profits for a chat before we get to their singles match. They are ready for their Tag Team Title match on Thursday against the Monday Night Messiah and Murph the Smurf. The titles are all that matters though because every day of their lives, they want the smoke.

Murphy throws his shirt at him to start but Dawkins is back with the shots to the face and a running elbow, followed by the spinning splash in the corner. There’s a Sky High and Seth Rollins comes in for the DQ at 1:08.

Post match Ford clears the ring and says Dawkins hit Murphy so hard last week that it erased his last name. Ford can do it to Rollins right now too.

Ford starts fast and knocks Rollins to the floor for the big flip dive and we take a break. Back with Dawkins and Murphy being ejected, allowing Ford to hit a heck of a springboard crossbody for two. A dropkick knocks Rollins down again but he grabs a suplex back inside for his own near fall. Ford rolls him up a few times but gets buckle bombed for his efforts. A running powerbomb into the barricade sends us to a break.

Back with Ford hitting an enziguri and a standing moonsault gets two. Another enziguri staggers Rollins and there’s a DDT for two more. Ford goes up but gets caught, only to sunset bomb Rollins down for the crash. The frog splash misses though and Rollins Stomps him for the pin at 15:21.

Owens pounds away to start but the threat of hit the Cannonball sends Orton outside. Cue Rollins and company for the distraction though and Owens is sent into the barricade as we take a break. Back with both of them down and the Profits and Viking Raiders running in for the big brawl. They fight to the crowd with everyone else, leaving Owens to get crotched on top.

Owens knocks him off anyway and hits the Swanton. Rollins is back though and Owens has to knock him off the apron, allowing Orton to come back with a clothesline. Another Rollins distraction lets Orton hit the hanging DDT….for a very fast counted pin at 8:10. Even Orton looks confused by what happened but he’ll take it.

Post match Rollins throws Orton some chairs but Owens pucks one up. The referee pulls it away so Owens grabs him and opens the referee’s shirt to reveal a Seth Rollins shirt. That means a Stunner to the referee and a powerbomb through a table ends the show. 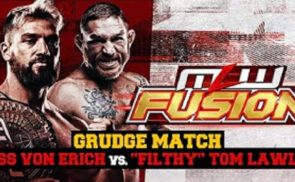