We are on the way to Extreme Rules and that means we need some things to set up for the show. That could take some time, as Raw has a tendency to not exactly rush things. There isn’t much going on with this show though, as we need something other than RKBro and waiting around for Goldberg to show up for the Bobby Lashley rematch. Let’s get to it.

Here is Damian Priest to get things going. He welcomes us to the show and talks about how he is going to show the title the respect it deserves. We hear about some famous US Champions, including Rey Mysterio, Jeff Hardy and John Cena. That’s unlike WWE Champion Bobby Lashley, who ran away from a challenge last week. Therefore, let’s have an open challenge.

US Title: Damian Priest vs. Sheamus

Sheamus is challenging but hang on because he needs to say he agrees with “Damo”. He promises to kick Priest in the face and take back his title but here is Drew McIntyre to interrupt. McIntyre thinks it’s time for something fresh and new because he has never been US Champion. Priest sounds game but Sheamus gets into it with McIntyre….and here are Bobby Lashley and MVP to interrupt.

The GOLDBERG chants cut MVP off as he tries to talk about Lashley wanted to issue his own open challenge. What’s good for business is Lashley becomes the new US Champion. Now Randy Orton and Riddle interrupt, with Orton saying he thought everything MVP said sucked. Riddle: “But not like a Rumba, because that’s what it’s supposed to do.” Orton thinks Lashley is a greedy son of a b**** and Riddle asks how you would even hold a second title.

Lashley says he could use a second title, but maybe it should be the Tag Team Titles. Riddle says the word of the day tonight is Open Challenge, they can have an open challenge one on one against Bobby Lashley and MVP. Orton tries to explain the concept of an open challenge but MVP says they accept. McIntyre, Sheamus and Priest are ready to fight so here are Adam Pearce and Sonya Deville to interrupt. We’ll have a triple threat match for the title, plus the Tag Team Title match. We’re STILL not done though as Rhea Ripley comes out…for her scheduled match.

Nikki Ash (uninvited it seems) and Nia Jax are here too. Hold on though as Nia promises to crush both Rhea and Nikki, just like she’ll do to Charlotte tonight. Shayna takes Rhea to the mat to start and cranks on an armbar. Some kicks to the head rock Ripley but she grabs a small package for two. Ripley tires the hand in the ring skirt and stomps away to send us to a break.

Back with Baszler kicking at the arm some more but Rhea tells her to bring it on. Some clotheslines and a headbutt rock Baszler and a basement dropkick connects. Baszler is fine enough to try a cross armbreaker but can’t get it on before a rope is reached. The Kirifuda Clutch is broken up as well but Jax crushes Ash on the floor. The distraction lets Baszler grab a torture rack into a rollup, which Ripley counters into a small package for the pin at 10:30.

The Viking Raiders are ready for you to join the raid.

Shanky is here with Mahal and Veer. Ivar and Veer start things off with Veer hitting a heck of a Thesz press to take Ivar down in a hurry. Mahal comes in to stomp away, setting up the chinlock. Ivar fights up and brings in Erik to clean house. Everything breaks down in a hurry and Ivar Cannonballs off the apron to take everyone out. That leaves Mahal to get caught in the Viking Experience for the surprise pin at 4:48.

US Title: Sheamus vs. Damian Priest vs. Drew McIntyre

Priest is defending and it’s Sheamus getting stomped down in the corner to start. Sheamus is sent outside for a step up flip dive from Priest, with McIntyre joining in for some chops. A backdrop sends Sheamus over the barricade and into the timekeeper’s area, leaving us with McIntyre vs. Priest as we take a break. Back with Sheamus hitting a top rope clothesline for two on Priest but the Irish Curse is countered into something like a triangle choke.

That’s broken up and the Irish Curse sets up some shots to the face, even with Priest going for the mask. The forearms to the chest keep Priest in trouble and he crashes out to the floor. McIntyre gets back in though and some clotheslines put Sheamus down. The Futureshock is countered though and McIntyre is sent shoulder first into the post. It’s Priest getting back in for a spinwheel kick to drop Sheamus but McIntyre clotheslines Priest to the floor.

That leaves McIntyre to hit the big flip dive onto the two of them for a bit of a breather. Back in and McIntyre plants Priest with a Michinoku Driver for two. Priest is sat on top but Sheamus knocks McIntyre into the Tree of Woe. The big situp German superplex (nearly a Tower of Doom this time) sends everyone flying though and we take another break. Back again with McIntyre and Sheamus slugging it out until Sheamus gets two off the Alabama Slam.

Priest comes back in to break up the Texas Cloverleaf on McIntyre, setting up South of Heaven for two on Sheamus. McIntyre and Priest slug it out again until Priest loads up the Reckoning. Sheamus breaks it up with a Brogue Kick though and McIntyre rolls Sheamus up for two. Futureshock drops Sheamus but he cuts off the Claymore with a knee to the face for a heck of a near fall.

The fans deem this awesome as Sheamus hits a super White Noise for two more with Priest making the save (which you couldn’t really see until the camera changed to a wide shot). Priest drops Sheamus onto the turnbuckle and ducks a Claymore so McIntyre kicks Sheamus’ head off. The Glasgow Kiss rocks Priest but he counters a tilt-a-whirl backbreaker into the Reckoning to retain at 21:30.

Post match, Priest and McIntyre shake hands in a show of respect.

We look back at Goldberg losing to Bobby Lashley at Summerslam, because that’s how you keep the momentum going.

Reggie is in the park when he sees R-Truth in a wig and Akira Tozawa in a dog costume. The chase is on but Reggie uses a Frisbee to escape. Reggie Parkours away but they corner him on a bridge. Tozawa crawls after him like a dog but Reggie flips away again. Tozawa thinks the dog is a bad idea and leaves.

Video on Eva Marie vs. Doudrop, with Eva bringing her in but Doudrop not liking her and rebelling.

Doudrop runs her over, sits on Marie’s chest and hits the basement crossbody for her own count. No match.

Doudrop announces herself as the winner as Marie isn’t sure what happened.

Charlotte laughs off the idea of Nia Jax squashing her.

Carrillo starts fast with a crossbody but Kross clotheslines his head off to take over (he hit him so hard that Smith thought Kross was fighting Ricochet). Kross runs him over again and sends Carrillo flying with a northern lights suplex. The chinlock goes on but Carrillo makes the comeback, only to get forearmed out of the air. The Doomsday Saito into the Krossjacket finishes Carrillo at 4:18.

Nia Jax promises to do something painful with Charlotte’s invisible crown.

Riddle thinks a win over Bobby Lashley/MVP would make for a good win on RKBro’s resume….but how do you make a resume? Randy Orton says just be a good tag partner and let him do his thing. That’s cool with Riddle, who lists off some more of his own skills. Talking and scootering are included.

Non-title and Charlotte bails from a charging Jax to start. Back in and Charlotte dodges again before slapping her in the face. Jax sends her into the corner but misses a running hip attack. Charlotte grabs a headlock to get as far as she can before switching to a dragon sleeper over the ropes. Jax is right back with a spinebuster and Charlotte needs a breather on the floor. They change places and Charlotte takes her down with a dive as we take a break.

Back with Nia dropping Charlotte hard in a belly to back drop (not suplex, but just a drop), only to miss a charge in the corner. The moonsault hits knees and Nia hits a Samoa drop. The running legdrop misses and Charlotte kicks her in the face. Charlotte gets on her back for a delayed reverse DDT for two more. With nothing else working, Charlotte starts in on the knee, including the DDT to take it down. Charlotte mocks Jax’s hip based material and gets kicked into the corner. Back up and Jax hits a powerbomb to win at 13:46.

John Morrison’s match vs. Miz has been canceled for no apparent reason, but he wants to prove he can act anyway. Therefore, he’ll face Omos tonight. Omos: “Sucks to be you.”

Morrison’s Drip Stick is smacked away and he can’t quite strike away at the giant. Omos shoves him outside so it’s time to bust out the Parkour. A bit of a slip lets Omos hit a clothesline, setting up the double chokeslam for the pin at 2:03.

Woods starts fast with a Russian legsweep and AJ needs to head outside. That means a big dive from Woods but AJ gets in a shot to the face back inside. The threat of the Phenomenal Forearm sends Woods outside so AJ hits a hard dropkick through the ropes. Back in and AJ starts in on the leg, including something like a Stunner out of the corner.

Woods grabs a rollup for two, followed by a northern lights suplex for the same. AJ can’t get the Styles Clash as Woods flips out and ties him in the Tree of Woe. The dropkick in the corner gives Woods an awkward looking two but Styles is right back with the Calf Crusher for the tap at 7:13.

RKBro is defending and AJ Styles, with Omos behind him, is on commentary. MVP drives Riddle into the corner to start but Riddle is right back with some shots to the face. That’s enough to put MVP on the floor, setting up the big springboard Floating Bro as we take a fast break.

We come back with Lashley working Riddle over until a hot tag brings in Orton. The hanging DDT hits Lashley but MVP is still legal and gets in a cheap shot. It’s back to Riddle for a knee to Lashley, setting up the Floating Bro for two. Everything breaks down and AJ decks Lashley, only to have to deal with Omos. The distraction lets Riddle hit a jumping knee to MVP, setting up the Floating Bro to retain at 10:49.

Post match Lashley goes after Riddle but walks into an RKO to end the show. 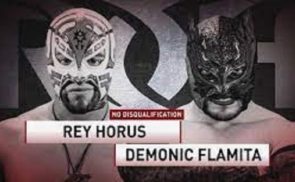 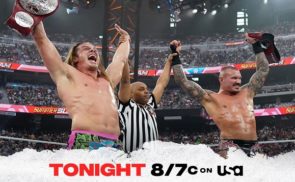