It’s another step closer to Death Before Dishonor and that means the card needs to be set. Ring of Honor has a tendency to take their sweet time with some of these things and that can be frustrating, but odds are this week’s show will continue focusing on the Women’s Title tournament. Let’s get to it.

We open with a recap of last week’s pretty good Champions vs. All Stars match.

Quinn McKay and Rok-C get into it over a matter of respect.

They shake hands to start and lock up to go technical early on. Rok-C grabs a bridging hammerlock but gets reversed with a hammerlock into a headlock. That’s reversed into a headlock from Rok-C, which is broken up as well and it’s another standoff. A knee to the ribs gives Rok-C two but McKay scores with some running shoulders to put Rok-C down. McKay powers her to the mat with a test of strength for some near falls but Rok-C runs the corner for an armdrag.

We take a break and come back with McKay holding her knee and the referee checking on her. Rok-C elbows her in the corner and an elbow drop gets two. McKay’s quick Tangerine Dream attempt doesn’t work and Rok-C is back with a Thesz press and some right hands to the face. A neckbreaker gives McKay two and she pulls Rok-C out of the air for a spinebuster. They fight over a backslide until McKay’s knee gives out, allowing Rok-C to grab a Code Red for the pin at 10:17.

Rating: C. And that’s Ring of Honor’s women’s division summed up in a single match: They have ONE STORY that is interesting in the whole tournament and now McKay is out in the first round. Rok-C is the more polished wrestler and it makes sense from a skill standpoint, but the entire women’s division has been built around McKay and the Allure. If they think Angelina Love is the big star of a women’s division in 2021, I have no idea why they’re going for. This was taking away the thing they have focused on more than anything else since the division came back.

Alize says she’ll win and Savoy says they’re friends and ex-roommates but she’s giving it all she can. They go to the mat to start with Savoy’s kneebar attempt sending Alize to the ropes. A top wristlock takes Alize down again so she bites the finger to escape. They trade rollups for two each as they’re somehow in a fast paced first gear. Alize sends her out to the apron and hits a dropkick to the floor, where Savoy grabs a suplex.

We take a break and come back with Alize getting two off a basement dropkick but Savoy grabs a fall away slam. That means we can look at commentary for a bit before coming back to Alize hammering away to win the slugout. Savoy doesn’t seem to mind and rolls some butterfly suplexes for two. Alize snaps on a Crossface, which is quickly escaped, setting up a Michinoku Driver to give Savoy two. They take their time getting up until Savoy dives into a superkick. Alize gets her own two off a DDT and the Drive By finishes Savoy at 13:04.

Rating: C+. Pretty good back and forth match here with Alize’s striking against Savoy’s suplexing. Alize has some good charisma and has been one of the brighter spots in the tournament so far. Savoy is a bigger name and has a reputation from her independent career, but Alize came off as the star here and should have moved on.

The Bouncers and Ken Dixon are ready to take over like never before. Dixon seems to be a bit of a third wheel but all they care about is winning.

No DQ. Flamita promises to bury him and Horus promises to show he is better. They go right to the chop off to start and Horus grabs a sunset flip for two. Flamita takes him down though and grabs a chair, which is kicked into his face. Horus’ dive is knocked out of the air with a chair shot though and Flamita sends him hard into the barricade. There’s a face first drop onto the chair on the apron and a table is set up at ringside.

Back in and Flamita grabs a suplex for two before striking down a comeback attempt. Horus is sent face first into a chair in the corner but he’s fine enough to pelt the chair at Flamita’s head. A big dive takes out Flamita as we go to a break. Back with Horus posting him hard and blasting him with a few chair shots. There’s a high crossbody for two back inside but Flamita nails a superkick into a butterfly backbreaker.

Horus is right back with a running tornado DDT, which has commentary questioning gravity. They head to the apron for the chop off and then to the top….where Flamita hits a super Spanish Fly through the table for the crazy spot of the match. Somehow that only gets two so it’s a Phoenix splash to finish Horus at 12:08. Not much of a need for the splash after the big spot just a few seconds earlier.

Rating: B-. They beat each other up rather well and, if you ignore the rather unnecessary kickout at the end, it was a heck of a fight. It’s a good way to build up Flamita for a possible match with Bandido and that should help both of them out quite a bit. Good main event here, which felt like a pretty definitive Flamita victory.

Overall Rating: B-. This was a pretty well balanced show with two tournament matches and the grudge match main event. I’m still not feeling the tournament and the McKay loss took away a lot of the interest, but the main event made up for enough. The worst of the three matches was certainly fine enough, but it would be nice to get some of the big stuff set up for Death Before Dishonor. 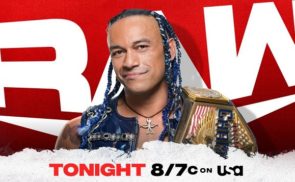