When one goes down, the other is hurt as well. Tag teams are a weird case in wrestling as what happens to one can often affect the other. That can be a major problem when someone gets injured, as there might not be anything left for them to do. If you have a team where a replacement partner isn’t exactly an option, an injury is some horrible news. I think you know where this is going.

The SmackDown tag team scene has been reignited in recent weeks, with teams like the Forgotten Sons and the Lucha House Party being added to Miz and John Morrison, plus the constant of the New Day. You might notice a team missing from the ranks though and that is due to someone getting injured, which is going to cause a problem for both himself and his partner.

According to Ringsidenews.com and confirmed by F4WOnline.com, Jimmy Uso has suffered a knee injury and will be out of action for six to nine months. The injury is believed to have taken place at WrestleMania 36, when he took part in a three way ladder match for the Tag Team Titles against Kofi Kingston and John Morrison. There is no word on what kind of injury Uso suffered or when the injury took place during the match.

It was a scary match. Check out how the night went and what the Usos look like when they are healthy:

Opinion: That’s a horrible thing to hear as it seems to have been an accident which caused the whole thing to fall apart. The Usos are one of the best teams WWE has ever seen it is a shame that they are going to be out of action for so long. I’m not sure what Jey can do in his brother’s absence but it might be a long time before we see him again as well. Hopefully it is closer to six months than nine, but that is still a long time.

Where do you rank the Usos all time? What should they do when they get back? Let us know in the comments below. 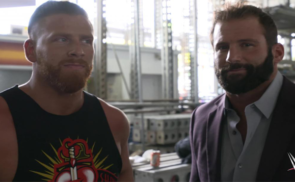