The card keeps growing. We are less than two weeks away from Money in the Bank and that means we are going to be seeing a lot of people in one match at the same time. With a rather insane twelve people involved in two matches at the same time, the match is going to be all over the place. It’s also not going to be the only match with a ton of people fighting at once.

Things have been picking up in the SmackDown tag team division as of late with some new teams getting in on the situation. There are suddenly a handful of teams coming for the titles and that makes things a bit more interesting. This includes some newcomers, and that means we are going to be seeing some fresh matchups. One of those will be taking place at Money in the Bank.

The four teams are all talented. Check out all of them in action:

Opinion: This wasn’t exactly a big surprise and that’s a fine thing to do here. They have set up the four way, though I’m not sure why this isn’t the Forgotten Sons getting their own title shot after beating New Day this week. I’m not sure what we are going to be seeing when we get to to the title match, but maybe it can be something interesting and give us something fresh in the title scene.

Who do you see winning the match? Who should win the match? Let us know in the comments below. 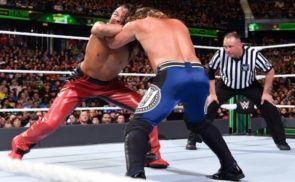 WATCH: AJ Styles vs. Shinsuke Nakamura From Money in the Bank 2018