Two more! This is a great time for wrestling fans. There is so much going on in the wrestling world and as fans, we get to see just about all of it. A lot of this can be attributed to the internet, including the WWE Network. With so many shows being available at the drop of a hat, it has never been easier to watch all of these big events. Now we know two more that are on their way.

NXT has become one of the biggest promotions in the world with one of the best receptions that you’ll ever see. There is great wrestling to be found everywhere with some of the most popular wrestlers in the world. At the same time, NXT UK has become an awesome British wing of the promotion with its own great shows as well. So when can we see the next two big shows?

During Sunday night’s Takeover: Portland event, a pair of Takeovers were announced. First up is NXT Takeover: Tampa on April 4, which will be the annual WrestleMania weekend Takeover. It will take place at the Amalie Arena in Tampa, the night before WrestleMania 35. The second event will be NXT UK Takeover: Dublin, which will take place on Sunday April 26 from the 3Arena in Dublin, Ireland. This is the first NXT UK Takeover to take place outside of the United Kingdom.

Takeover has some awesome moments. Check out a clip from each promotion’s most recent:

Opinion: Works for me. These shows have become some of the most interesting and entertaining things that happen under the WWE umbrella and we should be in for two more great shows with the two of them. I’m not sure which of the two will be better and that is the best thing that could happen to us as fans. NXT and NXT UK are both great, and that’s all you can ask for.

Which show do you expect to be better? How do you see the cards going? Let us know in the comments below. 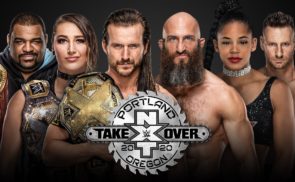