It’s time for a big special show here as we’re looking at Thirty Years of Chris Jericho. There are a lot of wrestlers who can manage to be in the business for thirty years but it takes someone special to be involved at this high of a level for this long. Jericho has made it work though and he has more than earned this kind of a night. Let’s get to it.

We open with a bunch of the roster paying tribute to Jericho. As it turns out, all of their favorite Jericho moments have come during his time in AEW.

Here’s what’s coming on the show.

Cage is defending. They shoulder it out to start until Hobbs blasts him with a dropkick. Hobbs hammers away in the corner but gets dropped hard onto the top turnbuckle. A clothesline cuts Hobbs off again and the standing moonsault gives Cage two. We hit the chinlock for a bit until Hobbs suplexes his way to freedom. Some clotheslines into a jumping shoulder have Cage in trouble and a powerslam gets two.

A Sky High is good for the same but cage is back with a pumphandle flipped over into a faceplant. They fight over a standing switch until Hobbs no sells a German suplex. Cage does the same and it’s a double clothesline to put them both down. The Last Will And Testament gives Hobbs two more so he goes up top to miss a frog splash. The Drill Claw gives Cage the pin at 9:08.

Post match Ricky Starks gets in the ring for the beatdown but Taz calls him off. Taz gives Hobbs the option of joining Team Taz or getting beaten down. Hobbs doesn’t give an answer though as Darby Allin comes out for the save. Taz swears vengeance.

Lance Archer talks about his Texas Death Match with Jon Moxley in New Japan. He has grown a lot since then and now it’s time to give Moxley a beating. Moxley has never faced anyone like him and Archer wants the title.

FTR, with Tully Blanchard, is defending as the Young Bucks watch from the back. Angelico kicks Harwood around to start and sends him outside in a hurry. The champs think about leaving but here’s Jack Evans to dive onto all three of them, only to hurt his knee in the process. That’s fine with Harwood, who takes Evans back to the floor and drops the bad leg onto the barricade.

Back from a break with Harwood staying on Evans’ knee until a sunset flip gets him out of trouble. Evans kicks him down though and the hot tag brings in Angelico to clean house. Wheeler gets knocked down for a leg crank but the rope is grabbed in a hurry. Evans tags himself back in and kicks Wheeler in the face. A top rope double stomp/belly to back suplex gets two on Wheeler and an assisted 450 is good for the same.

FTR is back in with a dragon suplex into the jackknife cover for two on Evans but Angelico saves him on the top. Evans tries a top rope flip but completely misses, save for maybe his boot hitting Harwood in the face. Angelico dives onto Wheeler, who Gory Bombs him onto the apron. Back in and Evans’ flipping backslide gets two on Harwood, who is right back with a tiger driver for two of his own. That’s enough kicking out so it’s the PowerPlex to plant Evans for the pin at 13:38.

In the back, the Bucks think FTR is good but superkick the cameraman instead. That should be about a $10,000 fine but Matt doesn’t have his wallet.

Back in the arena, we see a picture of FTR as hot dogs, because they’re weenies you see. Cue the Best Friends to say FTR is a pair of weenies, but the Best Friends are #1 contenders. The title match is next week so the fight is on, with the Best Friends holding up the Tag Team Titles.

Maxwell Jacob Friedman talks about Chris Jericho praising him after Double Or Nothing. Jericho told him to pick little things up from people he admired. MJF poked him in the chest and Jericho seemed to approve. Jericho is an inspiration and MJF may congratulate him in person.

We recap Brodie Lee vs. Cody for the TNT Title. Lee squashed him to win the title in short order and now Cody is back for the title and revenge. Arn Anderson talks about how this is going to be more physical and all the more difficult, which makes him nervous.

Lee is defending in a Dog Collar match and the Dark Order, Brandi Rhodes and Arn Anderson are all here. We get the Big Match Intros and Greg Valentine of all people is actually here. An early Dark Order distraction lets Brodie hit a big boot but Cody is right back with the drop down uppercut. The springboard is broken up though and Cody is pulled down hard to the mat.

Silver sits in a chair on the floor but Cody gets in a shot to take him down in a bit of a quick lesson. Back in and a DDT gives Lee…no cover but here’s Anna Jay to help Silver up. The two of them head to the back as Cody is busted open. That means it’s time for some chain shots to keep Cody down but he’s back with a low blow chain shot. A Russian legsweep with the chain takes Lee down again and they head outside.

Cody gets pulled down by the chain and Lee loads up a table at ringside. Some chairs are thrown inside as well but Cody pulls him off the apron and into a cutter in a smart move. They’re both down and we take a break. Back with Lee busted open after having been packaged piledriven through the ringside table and having to crawl around on the mat. Cody hammers away and hits the release gordbuster, followed by the choking in the corner.

Lee gets in some choking of his own though and there’s the swinging Boss Man Slam for two. A chained fist to the head has Cody busted open even worse and Lee throws a chair at Anderson’s head (and it got pretty close). Arn gets inside but has to give Alex Reynolds a spinebuster. Lee decks Arn but it’s Cody back up with some chain shots in the corner. Cody chokes with the chain and smiles a lot as Lee looks mostly done.

There’s the moonsault press for two but Lee hits a superkick into a powerbomb onto the chain for two of his own. They go outside again with Lee crashing head first into the post. Brodie is fine enough to superplex him back inside but the discus lariat is countered into Dustin Rhodes’ Final Cut. Cody wraps the chain around Lee’s face and elbows away at the face, setting up Cross Rhodes for the pin and the title at 20:25.

Post match Cody talks about how he isn’t changing anything because he changed his hair. Some people have wanted him to take another path and now he wants to defend the title next week at the Anniversary Show. He needs an opponent, so here’s Orange Cassidy for an exchange of thumbs up.

Swole goes for the leg to start but Deeb flips out and Swole needs to think about things. Some shots to the back slow Deeb down a bit but she’s right back with a hard right hand to the face. Deeb wrenches Swole’s leg around the middle rope and we take a break. Back with Swole’s knee still in trouble but a collision puts both of them down. Swole scores with a headbutt for two so she goes to the ropes, only to get pulled into a Backstabber to give Deeb two. Deeb’s arm trap piledriver is countered and Swole hits a superkick into Dirty Dancing for the pin at 8:33.

Jon Moxley isn’t going to be celebrating next week because it’s another monster waiting for him. Someone is going to have his number and maybe it’s going to be Lance Archer next week. They met in Tokyo and, with the flip of a coin, Moxley says it could go either way next week. Moxley is leaving it all in the ring but as Lance says, everybody dies.

Serpentico and Jericho start things off with Jericho knocking him into the corner in a hurry. It’s off to Luther for a clothesline and the stomping is on in a hurry. Serpentico adds a slingshot double stomp as we take a break. Back with Jericho hammering Serpentico down in the corner but getting caught with a DDT. Everything breaks down and Luther backdrops Serpentico onto the pile on the floor, followed by a big flip dive from the top.

Back in and Luther drops a top rope knee for two on Jericho, followed by a top rope knee to drive Jericho face first into the mat. The Judas Effect misses though and it’s the spinebuster/top rope Meteora for two more. Luther uses a Serpentico distraction to bring Floyd the bat to hit Jericho in the ribs. A running boot to the chest/stomach area gets two, which is enough to draw Sammy Guevara up to the apron. The distraction lets Sammy hit the Judas Effect for the pin on Luther at 9:05.

Post match Jericho grabs a mic and thanks the fans….but here’s MJF to cut him off. MJF says cut his music because he respects Jericho. He wants to be part of le celebration with Le Champion and he has a present for Jericho. MJF has Wardlow bring out….Clownico Le Clown, who has a present for Jericho. Before Jericho opens it, MJF promises a major announcement next week and he wants Jericho there for it.

As for the present, it’s a framed photo of MJF….which he breaks over the clown’s head. Jericho hits the Clown with a perfect Judas Effect and tells MJF that he hates clowns. MJF should never interrupt him again….and then they both laugh because everything is cool. The villains come out to celebrate with Jericho and we roll credits, with everything being credited to Jericho. 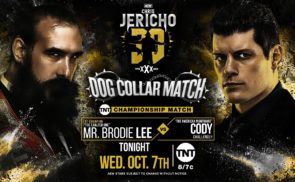