It might be the best timing. Injuries can come in many forms in wrestling, with some of them being a lot more serious than others. Some of them are more nagging injuries than anything else, which can cause quite a few problems of their own. You never know when someone might be on the shelf for a long time and that seems to be the case with both halves of a tag team.

Last month, Ivar of the Viking Raiders injured his neck on a dive in a tag match on Monday Night Raw. Ivar immediately threw up the X sign, indicating that he had a serious injury. Over the next few days, it became clear that Ivar was going to undergo surgery and would be out of action for a very long time. As a result, Ivar’s Viking Raiders’ partner Erik was left in limbo, so he is making the most of his time on his own by taking care of an issue.

Via his Twitter, Erik has announced that he has undergone surgery to fix an issue with his arm. A surgical screw had been protruding into his tricep and the operation was needed to remove it. There is no word on how long Erik will be out of action. Ivar could be out of action for over a year, though Erik has wrestled a pair of matches since Ivar’s injury took place.

Today I had hardware removed from my cyborg arm. I’ve been putting off this surgery for a long time and just worked thru the pain and limitations caused by a surgical screw protruding into my triceps.

Thanks to the wonderful Dr Dugas, I’m excited to come back at full strength. pic.twitter.com/9iwOr8jZKE

The healthy Viking Raiders are a great team. Check out what they can do when they are at full strength:

Opinion: This is probably Erik’s best option all things considered. It is unlikely that he is going to be used in any meaningful way while Ivar is out of action, so taking care of this now makes a lot of sense. Let him get his arm fixed up and burn off some of the time that Ivar will be away, because otherwise it could be one loss after another to take away even more of his aura from the fans. Hopefully he’s back soon, but also hopefully WWE doesn’t job him out for the next year.

What do you think of Erik? What should WWE do with him while Ivar recovers? Let us know in the comments below. 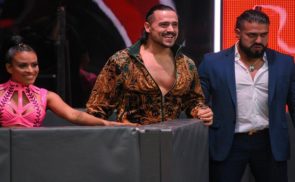