How are we over nine months of this show? We’re still down in Miami after last week’s attempted murder.. This week is a bit of a nicer note as Pentagon faces Teddy Hart in what should be a preview of a Tag Team Title match. There’s other stuff around here besides people being stabbed in the kidneys so let’s get to it.

We open with a recap of last week’s attack on Konnan. Tom Lawlor made the save, albeit after the stabbing.

They take turns playing to the crowd before the bell and the fans are WAY behind Loco here. A hug sets up some posing together before the match, allowing Park to get in a cheap shot and take over. They go outside into the crowd to avoid the whole wrestling thing early on. That means a lot of walking around with an occasional punch thrown until it’s back to the ring for the Park strut.

The dueling chants begin, much to Park’s annoyance. Park gets in a few belt shots to make the fans gasp instead of cheer, which is quite the change of pace. They head outside again with Park powerbombing him through a pair of chairs, with Tony talking about how it should be ok as long as no one bleeds. Park finds a Mexican flag to wrap around his head, drawing a USA chant.

Back in and Park gives us some pelvic thrusts but misses a charge in the corner. Another strut takes too much time, allowing Loco to hit a double springboard into a cutter for a rather near fall, freaking Salina out horribly. Loco throws him outside for a flip dive and a dropkick through the ropes keeps Park in trouble.

It’s time to head to the entrance with Loco diving off the set with a crossbody for a huge dive. Back in and Loco takes his sweet time loading up Spiral Tap, allowing Park to roll away with no problem. Park stops to yell at the referee and accidentally crushes him twice in a row. He’s fine enough to see Park hit a spear and then count a pretty fast three at 12:18 though.

Post match Park makes some rather sexual gestures to some people in the crowd.

Kotto Brazil talks about Ricky Martinez attacking him in the nightclub. He has to wear an eye patch for the time being but he’ll get his revenge.

Here are the fines from Promociones Dorado attacking Konnan:

On the phone, Konnan says he’s in bad shape and promises to give Low Ki and company what’s coming to them.

Low Ki talks about how Tom Lawlor got started at Battle Riot and now he’s coming for the title. Tom isn’t a conqueror though and Low Ki is going to make an example out of Tom in front of his children.

Fred Yehi is back from his three month international tour but he’s been keeping up with what’s been going on around here. That’s why he wants to fight Low Ki with his bald head next week. A fight, not a match.

We look back at Ace Romero defeating Simon Gotch last week to win $20,000.

Romero is going to spend half the money on food and half on something that makes his eyebrows go up. He’s coming for the World Title though.

It’s time for the Super Fight Control Center. This includes the Lucha Bros vs. the Hart Foundation for the Tag Team Titles plus a few people who don’t have matches yet.

Next week: Tommy Dreamer vs. Brian Pillman Jr. in a Singapore Cane match.

Dreamer talks about the history of the cane and how painful it can be in a variety of ways. He brings up the original caning match in ECW and how much damage, both physical and mental, has been done to him over the years. Pillman doesn’t know what he’s in for.

Non-title. The Hart Foundation plus a former University of Miami football player are in Hart’s corner while Pentagon is on his own. As a bonus, Smith is now dressed like Hart. The fans are behind Hart again, which tends to always be the case, and the announcers have to acknowledge them. CERO MIEDO gets a nice chant of its own though so this is far from one sided. Hart offers a handshake but gets CERO MIEDO instead so Hart punches him down.

They slug it out with Pentagon getting the better of things but Hart reverses a suplex to the floor into a Stunner. Teddy’s hanging piledriver (Orton’s DDT but a piledriver) sends Pentagon to the floor and there’s the moonsault to make things even worse. In the classic heel move of the night, Pillman offers a distraction so Smith can get in a cheap shot. Pentagon fights back against all three Harts at the same time but Hart pops him in the jaw to cut him down.

They fight back to the apron and that means a Canadian Destroyer to crush Hart, though of course he’s right back up a few seconds later. Hart can barely stand and a second Canadian Destroyer, this time from the middle rope, makes things even worse. Since Hart can’t stand, Pentagon ties him in the ropes for the loud chops. Hart can’t manage the walk over Pentagon’s back for the sunset flip so it’s a regular dropkick for some more success. A moonsault gives Hart two and the top rope moonsault elbow gets the same.

Pentagon scores with a superkick in the corner and the Fear Factor (still called the Pentagon Driver here, which has to be a copyright thing or something) gets two on Hart. Something like a Whisper in the Wind drops Pentagon again and now the Lionsault (minus the run) connects for two. Pentagon can’t break the arm as Hart is right back with a Backstabber. A DDT and the powerbomb into a Backstabber finish Pentagon at 11:20.

Result: Teddy Hart b. Pentagon – Powerbomb into a Backstabber (11:20)

If you like the sound of this, you can check out the full show right here for free: 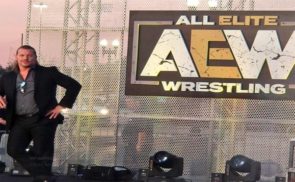