It’s FINALLY the last of the double shots as this is the go home show for NXT UK Takeover: Blackpool. The card is all but set so this is going to be a bunch of final touches for the card. That should be pretty easy to do, though it’s going to mean a lot of talking. In this case that might be better, as the matches around here are hit and miss. Let’s get to it.

We open with a look at Gallus vs. British Strong Style tonight.

Conners tries to drive him into the corner to start but gets caught with a running hurricanrana. A rollup gives Ligero two as this fast pace doesn’t seem to favor Conners. They fight to the apron with Ligero getting posted to give Conners his first breather. A heck of a clothesline gives Conners two as the fans are behind Ligero.

A slingshot suplex gets two and we hit the chinlock. The expected comeback works as expected as Ligero comes back with clotheslines. A fireman’s carry slam gets two on Conners but he hits a double stomp out of the corner. Not that it matters as Ligero is right back up with a springboard tornado DDT and the pin at 5:19.

James Drake and Zack Gibson deserve the shot and the titles, which they’ll get on Saturday in Blackpool. Of course they’re confident, to the point that they’ve cleared off their mantles for the titles.

Dave Mastiff thinks Eddie Dennis is jealous because Mastiff handed him his first loss. There’s one undefeated monster around here and that’s Mastiff.

T-Bone has Saxon Huxley in his corner. Some early forearms to the back have Banks in trouble but he dropkicks T-Bone into the corner. That means a running double stomp and the fans are rather pleased. Hang on a second as he’s Jordan Devlin in Banks’ gear, though the distraction isn’t enough for T-Bone to take over. Banks superkicks him down and chases Huxley off the apron. The Slice of Heaven gives Banks the pin at 2:06.

Post match Devlin comes in for the beatdown but gets kicked out to the floor.

Video on Toni Storm vs. Rhea Ripley, focusing on their first match where Ripley won the title over an injured Storm.

Takeover rundown, including Devlin vs. Banks being added.

Joe and Bate start things off with a test of strength. Bate gets taken down but does the always impressive bridge, with Coffey not being able to break it down. Now it’s Bate fighting up and almost getting Bate down until a knee to the ribs cuts him off. Back up and Bate hits a dropkick into a nipup for the staredown, drawing in the other four for a big staredown.

We settle back down for a tag to Wolfgang, which draws all six in for another glaring session. It’s off to Mark vs. Dunne with a running clothesline hitting Mark, drawing all six in again. Gallus gets sent outside for a nice reaction from the fans and a breather for the villains. Back in and Dunne takes Mark down by the arm and bends the fingers back for painful measure. There’s a surfboard double knee stomp as Dunne doesn’t seem to be having much trouble here.

Bate comes in to keep up the pace until a cheap shot from Wolfgang lets Mark grab a suplex. It’s back to Joe for a double underhook crank until Bate fights him off and dives over for the tag to Seven. House is cleaned with Seven hitting a backdrop on Wolfgang, followed by a suicide dive for good measure. Everything breaks down and Mark gets caught in a dragon suplex. Wolfgang kicks Seven to the floor though and Joe sends him into the steps to put the good guys in trouble again. A spear gives Wolfgang two and it’s back to Mark for the stomping.

We hit the front facelock for a bit before it’s back to Joe. They head to the corner with Seven catching him on top with a superplex, allowing the next hot tag off to Dunne. That means an X Plex to Joe and a kneebar to Wolfgang but he’s still able to crawl over for the tag to Mark. Dunne triangle chokes him so Mark tags Wolfgang, whose Howling is countered into an armbar. That’s broken up as well so this time it’s Bate coming in to clean more house. Joe misses a charge so Bate hits a running shooting star for two. The longest airplane spin I’ve ever seen plants Joe but Bate collapses from dizziness.

Bop and Bang is blocked but the second attempt gives us a double knockdown. Mark and Seven come in with Mark kicking him in the arm. That means the Seven Star Lariat doesn’t get a cover so everything breaks down again. We’re left with Mark vs. Dunne, but Joe picks up the UK Title to distract Pete. One heck of a powerbomb plants Dunne for two and it’s Bate coming back in for the rebound lariat on Joe.

Pete and Joe are left alone for the slugout with Dunne stomping on both hands. Joe’s spear is blocked with a knee to the head and there’s the Bitter End, but Wolfgang tagged himself in to run Pete over. Bate comes back in for a hurricanrana to put Wolfgang on the floor. Everyone joins him so Bate hits a huge corkscrew dive to take them all out. Back in and Bate kicks Wolfgang down but walks into Joe’s discus lariat for the pin at 25:28. 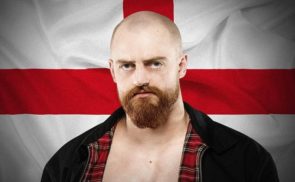 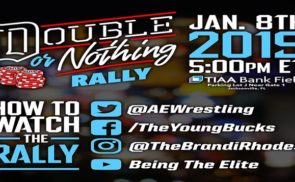