You never know what you are going to get around here and while that is usually a nice feeling on a wrestling show, it certainly is not the case here. There was a slight breath of fresh air around here with some of the Raw midcarders showing up but that seems to have already been forgotten. Hopefully things are a little bit better this week. Let’s get to it.

Tozawa’s running hurricanrana is blocked with straight power and Erik throws him hard into the corner. Erik throws him down again for two but the running knees in the corner only hit buckle. The cravate keeps Erik in trouble and a basement dropkick connects (or might not have, as there was a quick camera cut before it looked to miss). There’s a backsplash to hit Erik again but the chinlock doesn’t last long. Erik blocks Tozawa’s whip without much trouble and hits something like a standing Boss Man Slam for two. The knee to the face sets up a knee to the back of the neck to pin Tozawa at 5:03.

Long video on the history of Bayley vs. Sasha Banks.

Banks is defending and drives Bayley into the corner to start. A forearm to the face sets up the rope walk wristdrag to take Bayley down but it’s too early for the Bank Statement. Back from a break with Banks hitting the running knees in the corner and Bayley heading to the apron. Banks gets a running charge so Bayley tries to use her legs to send Banks into the post…but leaves her over a foot short, meaning Banks falls onto Bayley/the apron instead in a nasty fall. Thankfully Banks is able to get back in for two and we hit the chinlock.

Banks gets back up and uses her legs to pull Bayley into the corner for a breather. The middle rope Meteora puts Bayley down but Banks can’t follow up. Instead Bayley rolls to the floor and it’s a crossbody off the apron to take her down again. We come back from another break with Bayley catching her on top but Banks takes it to the floor. Bayley counters a powerbomb with a hurricanrana into the announcers’ table but Banks breaks up the top rope elbow.

A running elbow on the apron sets up Banks’ frog splash for two but the Bank Statement is blocked. Bayley kicks her from the apron into the barricade…and it’s kendo stick time. The referee stops that so Bayley brings in a chair, but Banks throws it away. The distraction lets Bayley hit a Backstabber into the Bayley to Belly for a near fall.

Bayley’s top rope elbow gets two, mainly because it didn’t come close to making serious contact. A belly to back suplex gives Bayley two so she grabs the Bank Statement on Banks. That’s reversed into a cradle for the break and they head to the apron again. Bayley’s charge hits the post and now it’s the Bank Statement to retain Banks’ title at 18:24.

Post match Banks celebrates but Carmella pops up on stage with a superkick into an X Factor.

AJ Styles is guest referee and Sheamus bounces off of Lee to start. Riddle comes in to strike away in the corner but Sheamus drives him into the other corner to take over. Strowman comes in to step on Riddle’s hair and it’s already back to Sheamus to hammer away. AJ yells at Sheamus for getting too violent and Riddle accidentally knocks him down. Back up and Riddle does it again, meaning it’s time for Lee and Strowman to get in a fight of their own.

The large friend gets in the ring and we take a break. Back with Strowman chinlocking Riddle before hitting him with a toss suplex. Strowman’s charge hits post though and it’s Lee coming in for running splashes in the corner. Sheamus is thrown into Strowman and it’s a Spirit Bomb to put Riddle onto Sheamus in a crash. A heck of a clothesline drops Strowman for two but Sheamus is back with a jumping knee to Lee.

The Brogue Kick puts Lee on the floor but Riddle grabs a German suplex for two on Sheamus. Riddle goes after Strowman on the apron though and it’s Sheamus running him over again. The Brogue Kick is loaded up but Strowman tags himself in and throws Riddle around some more. The running powerslam is loaded up, though this time it’s Sheamus tagging himself in. A Brogue Kick knocks Strowman off the apron and it’s a rollup to give Riddle the pin on Sheamus at 12:24.

Lince Dorado is here with Metalik. Feeling out process to start with Carrillo hitting a quick shoulder for two. Back up and Carrillo slaps on a headlock which is broken just as fast. Metalik armdrags him into an armbar so Carrillo does the exact same thing. We take a break and come back with Carrillo grabbing an abdominal stretch.

That’s switched into a double arm crank before Carrillo misses a spinning kick to the face. Metalik counters a fireman’s carry into a DDT to put them both down for a breather. The Metalik Driver is countered into a springboard kick to the face for another double knockdown. Carrillo plants him again but misses the moonsault, only to come back with the torture rack slam for the pin at 9:57.

Morrison and Woods start things off with a quick double team putting Morrison down. Miz comes in and gets taken down as well, sending him over to Orton for a tag, though Orton is not exactly interested. Instead it’s back to Morrison, who gets taken down with a standing stomp. Everything breaks down and Miz and Morrison are sent to the floor. The big double dive takes them down again (though Woods seemed to get caught in the ropes and might not have made contact whatsoever).

Back from a break with Morrison hitting an Alberto double stomp to drive Woods into the apron. Morrison hits something like a Samoan drop on Woods so Miz comes back in, only to still not get a tag from Orton. The delay lets Woods fight up and bring in McIntyre to clean house. A double overhead belly to belly suplex sends Miz and Morrison flying, followed by the Future Shock to Morrison.

McIntyre stares down at Orton and begs him to make his day. Orton teases tagging in but walks away instead. Morrison hits a crazy flip dive onto Woods but the Flying Chuck is knocked out of the air with the Glasgow Kiss. The Claymore pins Morrison at 13:26, with McIntyre glaring at Orton during the cover.

That’s a lot of people at once: 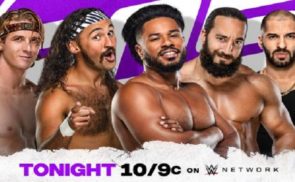 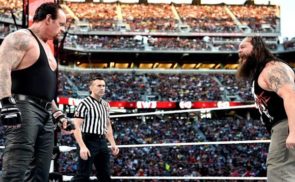