It’s back to the land of random as this show continues to be all over the place. You never know what you’re going to see around here and I can’t believe I’m saying this after watching this show for so many years. I’m not sure what to expect this week and I like that feeling. Let’s get to it.

Non-title. Gulak can’t do much with the huge Reed to start as he gets thrown down a few times. Reed lifts him up for a piledriver and then throws him down instead. There’s a rather heavy headlock to set up a knockdown into a backsplash as it’s all Reed so far.

Gulak’s trip to the floor lets him snap Reed’s arm across the top but an Irish whip doesn’t work. Another shot to the arm works a bit better but Reed calmly gorilla presses him. Gulak jawbreaks his way to freedom and starts in on the arm again, only to have Reed crush him. A suplex into a Death Valley Driver sets up the Tsunami to finish Gulak at 4:15.

Reigns is defending inside the Cell. Rey grabs a chair to start and knocks Reigns down, setting up a fire extinguisher blast to the face. A toolbox off the head knocks Reigns silly again and we take a break. Back with Rey wrapping a chair around Reigns’ throat and sending it into the Cell wall. That isn’t enough as Rey sends the chair into the post as well, leaving Reigns reeling even more.

Rey sets up a table and avoids a spear to send Reigns through it, but a hurricanrana is countered into a swing into the Cell. Reigns tosses him face first into the Cell and we take another break. Back with Reigns firing off knees in the corner and nailing the Superman Punch (Heyman: “HE’S GOING TO ACKNOWLEDGE YOU!!!”).

The spear is cut off with a dropkick though and a 619 connects in the corner. Some chair shots to the back and arm have Reigns down again and the frog splash onto the chair onto Reigns connects….but Rey can’t cover. Rey adds another splash just onto Reigns for two but a top rope hurricanrana is countered into a toss powerbomb over the top and into the Cell. Back in and Reigns grabs a choke to make Rey tap at 16:02.

Here are Adam Pearce and Sonya Deville to deal with the Rhea Ripley/Charlotte fallout. Ripley comes out and wants to know why that was a DQ, but here is Charlotte to promise to destroy Ripley soon. Deville gets to the point and makes the rematch for Money in the Bank.

Non-title and Kross’ entrance is completely stripped down to just a fire background and music with no Scarlett. They go with an aggressive fight over a lockup to start with neither being able to get very far. Benjamin takes him down with a waistlock but Kross fights up to pummel him into the corner. An elbow to the back lets Kross talk trash but Benjamin is right back up. That doesn’t last long as Kross sends him into the corner, only to come back with a neckbreaker.

A Cactus Clothesline puts them both on the floor and we take a break. Back with Kross hitting a running clothesline for two and choking on the rope. We hit the armbar but Benjamin grabs an armdrag to escape. That just seems to annoy Kross but Shelton hits a quick Stinger Splash. Kross is ticked though and snaps off a suplex, only to get caught in the Dragon Whip for two. That’s too far for Kross, who pulls him into the Krossjacket Choke for the win at 8:03.

Here are Bobby Lashley and MVP, flanked by his latest group of women, for the VIP Lounge. MVP brags about Lashley retaining and hands him the floor. Lashley says he was pushed to his limit last night but proved that he is still the Almighty. They brag about their win and load up a toast but here is the New Day to interrupt, complete with a plate of toast. Said toast is thrown into the ring, prompting MVP to talk about how this is more proof of what goofs these two are.

MVP accuses Kofi Kingston of not taking things seriously and hanging out with his video game obsessed friend. Kofi says not so fast but Lashley talks about being on a higher level than the two of them. That makes Kofi laugh as he talks about becoming WWE Champion at Wrestlemania XXXV and then beating Lashley last week. We see a clip of said loss and Lashley isn’t cool with that.

The challenge is on Lashley accepts for Money in the Bank, but he wants to make sure it’s one on one. Therefore, he can beat up Xavier Woods tonight. That’s cool with Woods, who cuts off MVP from talking down to him. Woods runs down his own accolades, which mainly include being on YouTube and G4. Oh and let’s make tonight’s match inside the Cell.

We take a rapid fire look at the Money in the Bank qualifiers.

Non-title with MVP and Kofi Kingston here as well. Woods tries to start fast but gets powered out to the floor. That means it’s time for a chair, which Lashley punches into Woods’ face. The running charge hits the post though and Woods is able to dropkick Lashley into the Cell twice in a row. A running chair shot drops Lashley again and we take a break.

Back with Lashley hammering away until Woods misses a charge and falls out to the floor. Woods’ charge lets Lashley tie him in the ring skirt though and the beating is on again. Lashley stops to yell at Kofi though and Woods gets back inside. A forearm to the leg cuts Lashley down for a second and Woods gets in a hard kendo stick shot. Woods gets in more shots with the stick on the floor and a victory roll faceplant is good for two back inside.

A tornado DDT gives Woods two more so he sets up a table. Lashley’s quick powerbomb attempt is broken up and a superkick puts him on said table. The rope walk elbow sends Lashley through the table for two (with Woods almost overshooting him) but Lashley sends him face first into a chair in the corner. The spear sets up the Hurt Lock to finish Woods at 13:37.

Post match the beating stays on with MVP getting inside the Cell and locking it back. Lashley puts Woods up against the Cell as Kofi can’t do anything to end the show. 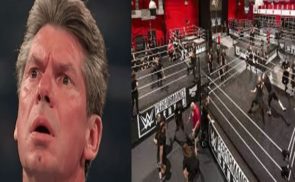 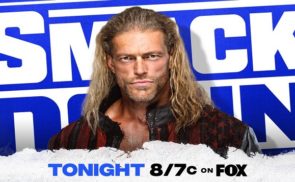