We’re officially done with Wrestlemania now and I don’t think that is going to mean a thing. It might have when there was a full on crowd for the show, but at this point, it isn’t like they need to try with this show. In other words, welcome to Main Event, where everything is as usual. Let’s get to it.

Tozawa takes him to the mat to start and it’s off to the arm cranking. That’s broken up and Tozawa goes after the arm, followed by a few shots to the face. Mansoor sends him outside though and teases the dive, only to have Tozawa come back in. That works for Mansoor, who pulls him into a half crab.

A rope grab gets Tozawa out of trouble so it’s a German suplex into a backsplash for two on Mansoor. The chinlock goes on but Mansoor fights up and gets sent to the apron. That’s fine as he slingshot back in and hits a basement dropkick for a quick two. Some atomic drops set up a spinebuster for two and the slingshot neckbreaker finishes Tozawa at 5:20.

It’s time for Alexa’s Playground, with Alexa Bliss talking about how there was once a scared little girl who needs to be saved. Then the darkness came along and saved her, but one day she realized she didn’t need to be saved anymore. The girl realized she didn’t need the darkness anymore and did what she could do to get rid of the darkness on her own. Now the girl is going to have her own fun. We also meet Lily, a rather disturbing Alexa Bliss doll….who comes to live and bites at the camera.

It’s time for the Firefly Fun House where everyone seems rather happy to be here. This includes Bray Wyatt, who is so glad to be back. Abby the Witch isn’t happy, which Bray says means witches be lyin. Ramblin Rabbit is glad that she, likely meaning Alexa Bliss, is gone. Bray throws him away and says they still have each other. This could be a new start for all of them and a new season for all of them. Maybe even a brand new him, because he could be reborn. Everything will be fine because HE will return and the Fun House will be strong. Bray nearly broke into song on that last part, complete with a rather up tempo beat behind him.

We look at Rhea Ripley winning the Raw Women’s title from Asuka.

Asuka is challenging and jumps Ripley to start but gets shoved away. The threat of a cross armbreaker sends Ripley into the ropes for the break. Ripley sends her outside and we take an early break. Back with Ripley sending her hard into the corner but Asuka comes back with a middle rope dropkick. Some strikes to the face, including a running basement kick to the face, get two on Ripley.

A few shots put Asuka down again and the Prism Trap goes on. With that broken up in a hurry, Ripley pulls her into an electric chair. That’s broken up as well and we hit the Fujiwara armbar, with Asuka switching into the Asuka Lock. Ripley gets her into another electric chair and drops her face first for another break. They head to the apron with Asuka ramming her into the turnbuckle….and here is Charlotte to jump both of them for the double DQ at 11:50.

Result: Asuka vs. Rhea Ripley went to a double DQ when Charlotte interfered (11:50)

Post match the beatdown is on and Charlotte is rather pleased.

Stills from Roman Reigns retaining the Universal Title over Edge and Daniel Bryan at Wrestlemania.

Gulak throws his jacket at Garza, who uses it to wipe his shoes. You don’t do that to Gulak, who dropkicks Garza into the corner and grabs a rollup for two. Back up and Garza gets in a shot to the face as we take a break. We come back with Garza hammering away and slapping on a front facelock. Garza fights up and hits a kick to the ribs, allowing him to TAKE OFF HIS PANTS, throw them at Gulak, and get two off a clothesline.

Gulak gets in a shot of his own and it’s a double knockdown. Garza superkick is countered into an ankle lock, which he switches into a rollup but can’t break the hold. Instead Gulak switches to a choke, with Garza making it to the rope. Back up and they trade rollups for two each until Garza grabs the Wing Clipper for the pin at 10:52.

Clip of Bobby Lashley retaining the WWE Title against Drew McIntyre at Wrestlemania.

We get a quick look at the setup for Raw’s triple threat main event.

The winner gets a shot at Bobby Lashley at Wrestlemania: Backlash. Strowman goes after McIntyre to start but Orton helps make the save with a double suplex. Everyone is knocked to the floor but the Strowman Express is cut off by the steps to the face. Orton drops McIntyre onto the announcers’ table and we take a break.

Back with Orton knocking McIntyre down and stomping at the ankle. They head outside with Orton sending him face first into the announcers’ table over and over. Strowman is back up to run them both over but Orton gets in a shot of his own to slow Strowman down. Back in and the RKO hits Strowman but Orton takes forever to get the pin, allowing McIntyre to Claymore Orton in the face for the pin at 11:12.

Post match here is MVP on the stage and McIntyre waits for Lashley. Instead, T-Bar and Mace run in from behind to lay McIntyre out with a double chokeslam. They stand on the floor with MVP watching on, though they don’t acknowledge each other. 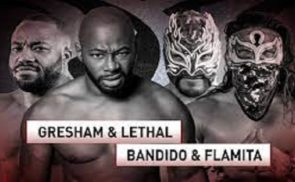 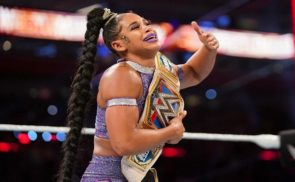