We are on the way to the 500th episode and that is going to be a heck of a show once we finally get there. Other than that though, you never know what you are going to see around here and that is a good thing, at least most of the time. I’m curious to see how they are going to do with the big one, but I’m also curious to see what they have with another normal one. Let’s get to it.

Delirious (with subtitles) talks about how much Rocky Romero means to wrestling. This includes giving Delirious a scar above his eye and since that scar is forever, it might make him hurt Romero.

Rocky Romero is back after losing the Pure Title Tournament and is ready to beat someone from his past. They have a history together and Romero is ready to win the Pure Title, which he could defend elsewhere. Since that should make him a heel around here, I’m relatively sure that it won’t.

Pure Rules and we hear about how Romero is representing New Japan. They go technical to start with Romero grabbing a full nelson to take over. That’s broken up but so is the chinlock so the grappling continues. Delirious’ headlock takeover keeps Romero down for a bit but he is right back up to grab Delirious’ rope. The threat of a half crab sends Delirious over to the ropes for his first break so he tries to grab the wrist for a change.

Romero sends him outside so Delirious comes back in with his series of forearms. A running clothesline drops Romero again but they both miss a series of clotheslines. Romero nails one of his own and we take a break. Back with Delirious working a hammerlock as commentary talks about the show being on longer than Nitro.

The Cobra Stretch goes on but Romero slips out in a hurry, only to be clotheslined down for two. Delirious grabs a backbreaker and puts the clutch on again but Romero backflips over for two more and a break. They slug it out with a minute left and Delirious punches him down for two more. Back up and Romero flips him over into a cross armbreaker for the tap at 14:51.

We look at Brody King debuting his own stable (Tony Deppen/Homicide/Chris Dickinson) to go after La Faccion Ingobernable.

The Briscoes talk about how they were supposed to fight each other last year at the Anniversary Show but the pandemic happened. Then EC3 got Jay’s attention so Mark got PCO to go after the Tag Team Titles. That was a waste of a title shot though, meaning it’s time for them to fight at the 500th episode.

Rey Horus has been pulled from the main event but Mexisquad is a trio so Flamita is in instead. That needed a meeting?

Jay Lethal is ticked off and ready for Mexisquad tonight. Jonathan Gresham doesn’t seem to be as fired up, but that is a hard level to reach.

Jonathan Gresham/Jay Lethal vs. Flamita/Bandido. Lethal and Flamita start things off with Flamita armdragging him down. That’s fine with Lethal, who pops back up for the basement dropkick. Gresham comes in for a headlock and then snaps off a heck of an armdrag to put him on the floor. Bandido comes in and sends Gresham outside so Lethal can come in as well.

This time it’s Bandido taking Lethal into the corner so Flamita can come in with a top rope ax handle to the arm. The Squad has some communication issues though, allowing Gresham to grab a German suplex. Gresham cranks on Flamita’s leg and it’s off to Lethal for an armbar. Lethal stays on the hammerlock and it’s back to Gresham for a seated abdominal stretch. The Octopus doesn’t work so Bandido tries an enziguri….which hits Flamita.

It isn’t much of an enziguri though as Flamita is fine enough to kick Jay down and bring Bandido back in to pick up the pace. A dropkick to the back breaks up the Lethal Injection to Bandido but Flamita drops Bandido to mess up a double team. Flamita blames the arm but the fight is on anyway, allowing Gresham to take out Flamita on the floor. A powerbomb sets up the Figure Four, with Flamita taunting Bandido instead of making the save. Bandido has to tap at 13:45.

Flamita walks out on the team to end the show. 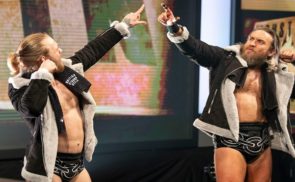