It’s that time of year again. We are in the post WrestleMania season and it is one of the most interesting and important times of the year. WWE is starting to get into its (unofficial) new season, AEW is gearing up for its next pay per view, some of the smaller promotions are starting to put some things together….and there is almost nothing to talk about for whatever reason.

Yeah we are in another one of those lulls, as there is almost nothing going on at the moment that has not been covered to near death already. That makes for a bit of an annoying time but it can also open some space up for a few other stories to get a chance for a change. That is what we are doing today, as I get a chance to bring back one of my favorites with In Other News.

This is a way to look at some of the other stories in wrestling which might not get the attention they deserve. Some of these will be from all over the wrestling world, including from WWE and AEW to the smaller promotions and hopefully some points in between. At least that’s the idea.

MLW Gets A New TV Deal, Returning With Fans

This is a double shot to start and it is a good way to get things going. MLW is a company that has been around for a pretty long while now and could use some positive news. They certainly have that this time around, as the show is getting on VICE TV to go along with its deal with the beIN Network. The more places that fans can see wrestling the better, and MLW is….well it’s good enough.

Then you have the fact that the company is going to be able to bring back fans to their events starting in July. That is something that has not taken place on a regular basis (at least on a large scale) in over a year and it is great to have them back. The company gets some extra energy and also some extra income. If they can find a way to do so while keeping things safe, everything is a positive.

Rich Swann vs. Kenny Omega Is Happening This Sunday

If you don’t watch Impact Wrestling, you might not have any idea that this is taking place. On Sunday, April 25, Impact Wrestling World Champion Rich Swann will be facing AEW World Champion Kenny Omega in a title vs. title match. That is not something you see every day and that is what makes the way it is being presented all the more annoying to have to see.

On the off chance that you don’t watch Impact, there is a good chance that you will have no idea this match is taking place. While it is the big story on Impact Wrestling at the moment, AEW has not exactly felt the need to hype it up all that much. Unless I missed a one off line (which is possible), the first mention of the match on Dynamite took place this week, as in less than a week before the match. This mention took place in a commercial, with commentary not bringing it up. I’d hope that AEW could do a bit better, but do they really need to help Impact?

Injuries are going to take place to almost everyone in wrestling at one point or another and there is almost no way around that. It is one of the worst parts about wrestling and unfortunately it happens with every wrestler, no matter how high up on the card they are. Some injuries are worse than others, but last week we saw a wrestler return from a pretty serious one.

Ivar made his return to Monday Night Raw on April 12, bringing him back for the first time since September, when he suffered a bad neck injury. Now he is back in his old team with Erik, and that is one of the best things you can see. I know Ivar and Erik might not be the biggest team in the world, but it always nice to see someone coming back from such a serious injury.

This took place….uh…..oh who knows given how messed up their schedule can be. I know WWE has a big lead in the total number of shows, but getting to such a milestone is a pretty impressive accomplishment. Ring of Honor has been the third biggest promotion in the country at their very best time but they have hung around as long as they have through a mixture of talent and effort.

Ring of Honor has been putting on some of the best television since its return from the long hiatus last year and really, that is not the biggest surprise. They have shown that they can get back to basics as well as anyone else. I’m not sure if the company is ever going to make it up beyond where they are now, but at least they have been around this long, which is more than a lot of shows can say.

We are officially done with the Wednesday Night Wars and that means it is time to have AEW Dynamite and NXT alone on their own individual nights. This is long overdue and things have already been a heck of a lot easier for fans, as they do not have to bounce back and forth between the shows, or even worst, watch one after another. Now we can find out something even more interesting, and it was a big one.

AEW drew a pretty staggering 1.2 million viewers during its first alone edition of Dynamite and that is rather impressive. It is the second biggest audience that the show has ever seen, save for its debut show, and shows you just how many people there were out there who wanted to watch Dynamite. I’m not sure how long these numbers are going to last, but for a first week, AEW has done rather well.

The US Open Challenge Is Back

In 2015, new US Champion John Cena introduced the US Open Challenge, which featured Cena defending his title against a challenger of the week. This became one of the best things going in WWE as the drama of who was coming through that curtain was outstanding. I wanted to see who was going to get to have a great match with Cena that night, and now we might be seeing something similar.

This week, US Champion Sheamus announced that he will be bringing back the US Open Challenge. While he did not actually wrestle a match because he attacked Humbeto Carrillo instead of defending the title, the idea is a rather intriguing possibility. Not just due to Sheamus being a heck of a star, but also because it could make for some outstanding moments every single week. Or it never happens and he drops the title in a month, because WWE.

WrestleMania weekend is special for WWE fans, but there is SO much more to it than just what WWE is doing. In addition to the big stuff, you can also see some of the best independent wrestling in the world. Wrestlers will be all over the WrestleMania host city and that was the case again this year, even during a pandemic WrestleMania weekend. One star showed off above almost anyone else.

I watched a lot of the independent shows from WrestleMania weekend and as usual, someone stood out. This time around it was Lee Moriarty, who is not only the Independent Wrestling TV Champion, but also one heck of a technician who can fly as well. He might not be ready for prime time just yet, but Moriarty shows promise and I could go for seeing him on a bigger stage in the future. It is always great to find new talent, and that certainly seems to be the case with him.

I know it is kind of a dull period for WWE and that should not be the case so soon after WrestleMania. It is supposed to be the biggest time of the year but for some reason the company has kind of let it be like any other time of the year. That does not mean that there is nothing going on though, and if you look around enough, you can find some interesting things both in and out of WWE. 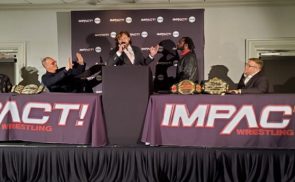