On The Line: New Title Match Set For WWE Money In The Bank

Add it to the list. We are less than a month away from WWE’s next pay per view with Money in the Bank. The show will be built around the show’s namesake matches and those will take up a bunch of time. There are other matches that need to be covered though and that includes some title matches. One of those has been added to the card and it should be a pretty big showdown.

WWE has announced that there will be a Tag Team Title match featuring the Street Profits challenging the Usos at Money in the Bank. This is the result of the Usos losing a Champions Contenders match on Monday Night Raw, earning them a title match at some point in the future. The match will be for both the Raw and SmackDown Tag Team Titles, both of which the Profits have held before.

Opinion: You knew this match was coming at some point and it is the kind of thing that makes sense. There are not many teams ready to challenge the Usos but the Profits certainly fit the mold. Let the two teams get in there and do their thing on a big stage, as it should be a rather nice match. They have set up the match and now let the wrestlers make the rest work. 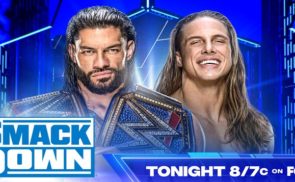