If you are reading this, there is a good chance that you are a pretty big wrestling fan. Someone willing to go out and find commentary on wrestling is someone a bit more invested than someone who watches Monday Night Raw and then goes on about their week without thinking about wrestling very much more. That’s where the hardcore fans come in and they are some of the most dedicated fans to any form of entertainment in the world. So why do they so often seem so miserable?

While it is absolutely not a universal truth, wrestling fans do have a reputation for not exactly being happy with what they are seeing. There are always going to be things worth criticizing and that is absolutely the case today, but how often do you see someone who just seems happy to be watching a wrestling show? They might not be the most thrilled with what is going on up and down the card, but there is such a joy to them that watching them at a show is almost infectious.

Every now and then I throw on some older (ok not that old in this case) clips for a quick watch. There are a handful that I almost always enjoy and one of them is the Shield’s first loss in a six man tag. Randy Orton, Kane and Daniel Bryan finally came together to defeat the team in one of the most exciting finishes to a match I have seen in a very long time. While the action is rather good, it isn’t anything that hasn’t been done before. With Roman Reigns and Dean Ambrose down, Orton shoved Seth Rollins into an RKO so Bryan could make him submit to the NO Lock. No, what made it work so well for me was someone else entirely.

Instead, the part that made me smile this time around was a kid, maybe ten years old at most, in the front row, watching this match and being completely entranced. This kid wanted to see the Shield lose and wanted to see Orton, Kane and Bryan be the people to make it happen. You can see that there is nothing else going on in the world to him at the moment and every single thing he is seeing is as important as it gets.

I know it was a long time ago and things have changed since then, but I miss being that kid. I miss being someone who can get completely sucked into a show or a match or an angle and having so much fun watching wrestling. It’s a special time in a fan’s life because it brings the feelings that you never forget. We have all been there at one point or another because they are the times that turned us into the fans we are today. Things have changed of course and not everyone can have the same childlike innocence, but that doesn’t make it any less special.

In a similar vein, I remember going to my first in person Monday Night Raw when I was nineteen. My seats were so bad that I could see behind the Titantron (though I could see the agents watching the show as well for a bit of a special treat) and the show wound up being pretty boring for the most part. There was one thing I could see rather well though and it made me happy to be a wrestling fan.

There was a girl sitting in front of me who was about eight or nine years old. Much like the kid at the Shield match, this girl was having the greatest time watching the show live. She had a large collection of signs (at least ten) with her and every time someone’s music played, she would jump up and start rifling through her signs to find the right one. The right sign would go up and she looked so happy (or angry, because she wasn’t the kind of fan who liked to cheer villains and boo heroes) for whomever came out to the ring.

What makes me smile so much about that is not only seeing someone having that kind of fun watching a show, but also how much effort she put into making that many signs. This girl found out that she was going to a show and started putting together so many signs that she had to search through them to find the right one throughout the night. You do not see that kind of enthusiasm from most fans and it was so refreshing.

Now yeah, of course a lot of that had to do with these two people being kids. They’re young, more impressionable, haven’t seen the amount of wrestling that we have seen over the years and are often brand new to this kind of thing. How many of us were there at one point too though? How many of us were right there, cheering for the heroes (could be Hulk Hogan, Steve Austin, Dusty Rhodes, Sting or maybe even Bruno Sammartino) and booing the villains (Vince McMahon, Ric Flair, Ted DiBiase, Eric Bischoff, Stan Hansen or someone else)?

There is nothing wrong with being a little more cynical as a wrestling fan (I certainly can’t complain about someone doing just that) but it can be a bit exhausting. It makes things that much harder to have fun because there are so few things that can make you smile. We spend too much time focusing on the negatives and not enough time just enjoying that we get to watch wrestling.

I watch a lot of wrestling. Like, a rather ridiculous amount actually. Not counting random matches or other things I might pop up every now and then for fun, I watch (and review) twelve wrestling shows a week, which does not count possible pay per views or other shows people ask me to look at. That’s a lot of time to spend watching wrestling but I do it for a reason (other than having bills to pay that is).

I do it because it’s wrestling and that means it’s awesome. As cynical as I have become about wrestling (it’s really hard not to), there are still times where I get sucked into what I’m watching all over again. Seeing Miz winning the WWE Title and then dropping it to Bobby Lashley eight days later was exciting stuff. I can get pulled into watching WrestleMania live like anyone else (the Undertaker’s entrance is absolutely chilling) and just knowing that the show is coming, no matter how weak the card may look, makes me smile.

As bad as we get, there is a wrestling fan in all of us and it would be nice to see that kind of happiness and joy come back a little bit. We might not be kids anymore but that does not mean that we can’t have a great time watching wrestling. Sure the shows might be bad a lot of the time (or you very well may like what you’re seeing and if so, that’s great) but it’s ok to smile at what you’re seeing every now and then.

No matter how bad wrestling can get, there is always going to be something worth seeing in there. Even during the dying days of WCW when things were getting terrible, they had a very nice cruiserweight division and Booker T. had come into his own as a singles star. The dark days of Impact Wrestling had AJ Styles and Kurt Angle as the veterans stealing the show and Bully Ray became the top heel in the company.

These diamonds in the rough are there in every single promotion, even in its worst days. It can be really hard to do, but there is something great about being able to find the good things that are still going on (like Sheamus vs. Drew McIntyre on this week’s Monday Night Raw) and having fun watching them. We’re adults now, but it’s ok to flash back to being a kid again, as those smiles are hard to turn down. 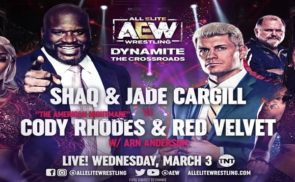