As of Wednesday, we are 2067 days removed from July 13, 2015, when Stephanie McMahon/the Bella Twins/Stephanie McMahon/Impact Wrestling/Stephanie McMahon/Every other woman ever in wrestling created the Women’s Revolution. Things have come a very long way since then, to the point where WWE’s women are running out of first time accomplishments. They have already headlined the Royal Rumble, Survivor Series and WrestleMania, had a Royal Rumble, Hell In A Cell, Elimination Chamber and Money in the Bank match and had their own pay per view.

Unless headlining Summerslam in a casket match is shockingly high on the list, there is not much left for the women’s division to accomplish. That is far from a bad thing and it is absolutely amazing when you consider that two years before the Women’s Revolution, the women’s match at WrestleMania 29 was cut and the women’s match at WrestleMania 30 was a 14 woman mess. Things have come a long way, and now we might be in for a new milestone….and it really isn’t needed.

Depending on when I post this, the following is either a pretty easy guess or a result: NXT is likely getting its own Women’s Tag Team Titles. This comes after a screwy finish on the previous week’s show where Shayna Baszler and Nia Jax retained the WWE Women’s Tag Team Titles by defeating the illegal challenger. General Manager William Regal complained and this seems to be the result. This is another milestone for the NXT women’s division and it is also a really bad/unnecessary idea.

There is no secret to the fact that there are more men wrestling for WWE than women (To be clear: this has nothing to do with talent, fairness etc. There are simply more of one than the other, strictly from a numbers standpoint.). There is also little secret to the fact that the men’s tag team divisions have not exactly shown any depth for a very, very long time. How many tag teams do you think there are on Monday Night Raw and SmackDown at the moment? A quick look at the rosters shows me about ten, depending on how official you consider some wrestlers who compete together/injuries.

Now instead of counting the number of women’s tag teams on the main roster, we are instead going to take a different approach. I’m going to list all of the Women’s Tag Team Champions in the history of the titles, which were officially introduced on February 17, 2019. There have been nine title reigns among six different teams, so here are those six teams, with a special number included.

Those numbers would be the number of televised two on two tag team matches the teams had before the won the Tag Team Titles (meaning the title win is not counted). Those numbers are rather pitiful and even a bit misleading (the IIconics had multiple gaps of months between matches together, Bliss/Cross’ first match as a team was a title shot, and Charlotte/Asuka’s one match was a one off from three years earlier where they turned on each other), but there is one thing that can’t be denied: aside from Bayley/Banks and maybe the IIconics, these aren’t regular partners winning the titles.

Some of you may be noticing a pattern emerging here. These aren’t regular teams getting title shots. These are women being thrown together for the sake of having a shot and nothing more. There have been six champions in the titles’ history and you have to add four of them together to get nine matches as a team before they won their first titles.

With that information about the main roster, as in TWO rosters of women put together, the solution is ANOTHER SET OF TAG TEAM TITLES??? It’s not like NXT is that much better. Consider the Women’s Dusty Rhodes Tag Team Classic, which featured a field of eight teams. Of those eight teams, there were a total of fourteen matches together, with two teams combining for thirteen of those and five (as in more than half of the field) having never teamed together at all.

But yet the solution is another set of Tag Team Titles. I get why WWE wants to do something like this, as a title match or a first ever champion is a surefire way to pop a rating, but my goodness people. You have how many teams with virtually or in some cases literally no experience vying for title shots or even flat out winning the titles on the main roster and the next step is ANOTHER set of belts?

There are enough women in the WWE and NXT divisions for a passable women’s division. As in singular, meaning one. Yet here we are, with a brand new set of titles so they can be thrown onto a Takeover in a match that will likely be quite good but with the prestige of the prize you find in a box of WWF Superstars cereal. Gonzalez and Kai won the Dusty Rhodes Tag Team Classic by winning three matches over teams with less than ten matches together combined. Is that supposed to be impressive?

The WWE Women’s Tag Team Titles have been around for a little over two years now and most of that time has seen them look pretty worthless. There is no division to support them and oftentimes the champions barely defend them anyway. I understand that things are a little different down in NXT, but do we really need another set of titles?

The much easier way out of this was to have Kai and Gonzalez take the titles from Jax and Baszler, but then we would have been deprived of their win over Naomi and Lana (the grizzled veterans) and their rematch over Banks and Belair (the equally grizzly veterans). What is this setting up for WrestleMania? No idea of course, as the champions have no viable challengers other than maybe Mandy Rose/Dana Brooke (with their eight career matches together, of which they have won two, both over Natalya/Lana, who teamed together five times in less than a month, never won and then had a breakup segment).

Aside from the obvious lesson (WWE is really bad at booking women’s tag teams), the reality is that WWE does not need two sets of Women’s Tag Team Titles. It might sound nice in theory, but look at the last two years and tell me this is an idea that makes sense. Send what you have down to NXT and go from there, which should be the thinking for a lot of what WWE is currently doing. 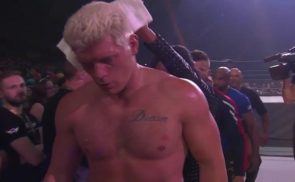 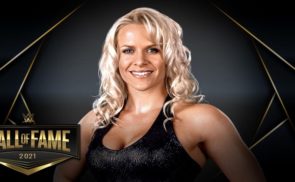