Another first time ever. There are a lot of things going on in the wrestling world at the moment and WrestleMania is right in the middle of the whole thing. Due to the mass outbreak of the Coronavirus, the biggest night of the wrestling year has been moved to the WWE Performance Center. However, it turns out that isn’t the only big change taking place with the show.

As a rule, WrestleMania is a long show, and over the last few years, it has gotten even longer every single time. That can change a lot about the way the fans respond to it, as there often reaches a point where the show just feels too long. Last year’s edition ran over seven hours with sixteen matches, including the Kickoff Show. Now, WWE may have a bit of a solution.

WWE.com has announced that this year’s show will be split into two nights, with the event taking place both on Saturday April 4 and Sunday April 5. Both nights will be hosted by Rob Gronkowski and will start at 7pm EST. The events will still be held at the Performance Center, with the shows being split to make sure a smaller number of people are in the building each night.

It’s official! I’m hosting @WrestleMania this year…and it’s gonna be too big for just one night. For the 1st time, #WrestleMania will be a ?2-NIGHT?event: Saturday, April 4 AND Sunday, April 5 on @WWENetwork! Tell you more this Friday night on #SmackDown at 8 ET on @FOXTV.

The show is going to be big. Check out some of the things planned:

Opinion: Normally I can’t stand the concept of a two night WrestleMania, but this is a different situation and something where you just kind of have to live with it. The limitation of people in the building is going to cause some problems and if this is as good as it can get, then it’s something that might make it better. As long as both shows don’t stretch out close to five hours each, everything should be fine.

Do you like this change? What will headline both shows? Let us know in the comments below. 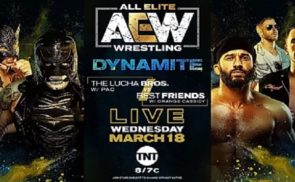