Suddenly things are going to be very different around here and that is going to be the case for the next few weeks. Starting tonight, like every other major wrestling show at the moment, AEW is going to be performing in front of no fans due to the outbreak of the Coronavirus. An odd show is better than no show though so let’s get to it.

Cody is in the middle of the completely empty arena to start and talks about how important it is to be healthy and smart. At the same time, AEW does something important in these kind of times. Tonight, Cody is going to be asking people to put aside their differences to do something special. We are going to see the Elite against the Inner Circle with the winners being the in command next week.

Cody needs the Young Bucks, Hangman Page and Kenny Omega to come out here and be the Elite. Cue Omega and Matt Jackson, with Omega saying he and Cody haven’t seen eye to eye but they will be the Elite tonight. Matt likes the call to action, even though Nick Jackson isn’t here due to last week’s attack. Page comes out, takes a sip of his drink, and walks away again. Omega says everyone needs entertainment and positivity so tonight, they’re giving the best they can give. So hit the lights and pyro so we can start Dynamite.

Video on the Best Friends vs. the Lucha Bros.

MJF and Shawn Spears are in the empty seats to gamble on the matches, but HOW DARE YOU suggest that they’re gambling!

Orange Cassidy is on commentary. Trent takes Fenix into the corner to start and it’s time for a chop off. A double shoulder takes Fenix down and a double suplex gives Trent two. Chuck knocks Fenix down for two more but Fenix pokes Trent in the eyes to take over. The stereo superkicks drop Trent and some more kicks to the leg keep him in trouble. Orange stands up to glare as Trent is sent to the floor, meaning it’s a big dive from Fenix. Trent takes both Bros down on the floor and we take a break.

Back with Trent getting kicked in the face but managing a tornado DDT to get him out of trouble. The hot tag brings in Chuck to clean house as everything breaks down. Cassidy gets on the announcers’ table as JR is nearly disgusted by the King of Sloth Style moniker. The Bros glare at him so Cassidy dives onto the both of them, allowing Chuck to piledrive Pentagon for two. The referee is distracted though and a low blow cuts Trent down, setting up the spike Fear Factor for the pin at 14:04. MJF seems to have won a lot of money.

Post match the Best Friends are livid and want a rematch, but in a street fight. Or maybe in a parking lot next week.

Penelope Ford vs. Riho vs. Kris Stadtlander vs. Hikaru Shida

One fall to a finish and Kip Sabian is at ringside. Ford gets double teamed to start before being knocked outside. That means a big dive from Riho onto all three others for the big knockdown. Back in and Riho is laid on the middle rope, with Stadtlander telling Shida to suplex her onto Riho. Stadtlander doesn’t like Shida trying to roll her up for two and the small package makes it even worse.

The two of them fight to the floor, leaving Riho to forearm Ford in the face and baseball slide Sabian for a bonus. Riho uses Ford as a launchpad to dropkick Sabian but Shida is back in to knee her in the face. Stadtlander makes the save but gets reverse hurricanranaed to the floor by Ford. Shida Falcon Arrows Ford for two, followed by the running knee for the pin at 5:50.

Post match Colt Cabana talks about how much he liked the match but doesn’t like Sabian interfering so much. Sabian gets annoyed so Colt hits him in the face, sending Sabian running away.

Earlier today, Jon Moxley was not happy with not being allowed to enter the arena due to not being medically cleared. When has he ever been medically cleared? He promises to be in the Inner Circle’s blind spot and he’ll be at Blood and Guts no matter what. Then he drives off in the expensive blue car.

Butcher & the Blade vs. Jurassic Express

No Bunny or Marko Stunt here, but MJF gives Butcher and Blade some cash before the match. Blade takes Boy into the corner to start and stomps away but a springboard armdrag takes Blade down. It’s off to Luchasaurus to power Blade down and that means we need a breather on the floor with MJF. Boy’s dive is countered into a toss into the barricade to put Express in trouble.

Back in and Boy’s eyes are raked across the top rope, followed by a side slam/legdrop combination. We take a break and come back with Boy still in trouble until he clotheslines his way to freedom. An elbow to the back cuts off the hot tag attempt though and the beating continues. Boy gets sat on top but he dives over Butcher and rolls over for the hot tag to Luchasaurus in a great visual.

Luchasaurus moonsaults to the floor to drop Butcher before launching Boy at Blade (which almost goes WAY too far as Boy has to save himself from falling over the top). Butcher and Luchasaurus slug it out and it’s an assisted swinging Rock Bottom to give Butcher two. Boy is back in so Blade can get Tail Whipped, with Butcher being sent outside. A reverse powerbomb/cutter combination plants Blade and Boy gets a running start….so he can step to the floor to stomp Butcher in what looks like a missed cue as Luchasaurus gets the pin at 12:33.

Hold on though as we get a video from the Exalted One himself. There are new rules for the Dark Order though: they do what they want when they want and if he wants something, it will be taken. The hood comes off to reveal Brodie Lee (formerly Luke Harper), who promises to destroy Daniels. Back in the arena, Lee is in the ring and wrecks SCU.

Lance Archer is at ringside but Jake Roberts cuts him off to challenge Cody to a fight.

We go somewhere out in the woods where a ring is set up with Lance Archer beating up a bunch of people as Jake Roberts watches on. Archer beats them up while shouting EVERYBODY DIES and then chokeslams someone onto a car.

Next Dynamite (there is no mention of next week): Luchasaurus vs. Wardlow in a lumberjack match, the Lucha Bros vs. Best Friends in a parking lot fight and Blood and Guts.

That would be Santana/Ortiz/Jake Hager vs. Cody/Hangman Page (“social distancing since November”)/Matt Jackson with the winning team getting the advantage in Blood & Guts. Chris Jericho is on commentary so Sammy sings Judas in a cool moment. Arn Anderson and the rest of the Inner Circle are at ringside as well. Cody and Santana start things off and it’s a quick snap powerslam to drop Santana. Even Jericho has to admit that it’s a nice powerslam.

Ortiz comes in for a cheap shot as we hear about Santana and Ortiz failing gym and not having first names. It’s off to Matt and the arm work begins but Page tags himself in, much to Matt’s annoyance. Page clotheslines Santana twice and gets two off a bridging pumphandle fall away slam. Everything breaks down in a hurry and Cody gets superkicked on the apron as we take a quick break.

Back with Cody getting suplexed and sent into the barricade as Jericho mocks Anderson’s clothing. They come back in and Hager works on Cody’s arm, followed by a chinlock from Santana. Cody snaps off a Cross Rhodes to Ortiz though and Hager freaks out. Hager gets dropped to the floor but he comes back in and cuts off the tag as we take another break. Back again with Cody avoiding the Vader Bomb and Page getting to come in and clean house.

The dive tot he floor drops Hager and a sliding lariat gets two on Santana. Everything breaks down and Cody dives onto Ortiz and throws him at MJF. Wardlow grabs Cody by the throat so Anderson makes the save with his notepad. Back in and Matt rolls the northern lights suplexes on Santana but can’t do it to Hager. Page joins in and the double version puts Hager down but Hager breaks up the Indytaker to Santana. With Nick surprised, Santana rolls him up for the pin at 20:08.

Post match Jericho brags a lot and bans all fans from all future Dynamites because he’s Chris Jericho. The Inner Circle is at an even bigger advantage because they’re up 5-4. Hager does pushups, and even does one with Sammy Guevara on his back. They have dominated everything and will dominate Blood & Guts as well. Sammy hits on Brandi…..and VANGUARD 1 flies into the arena. Matt says he has made a phone call to a friend who owed him a favor, meaning we hear a piano. Broken Matt Hardy appears in the stands and Jericho looks a good bit worried to end the show. 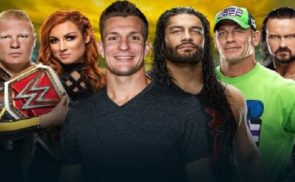