An Infamous WWE Stable Had A Very Different Original Plan

It isn’t how he drew it up. Stables have been a constant factor in wrestling for a very long time, with some of the most famous names in wrestling history having been a part of one at some point. They are an easy to understand concept and allow multiple wrestlers to get television time at once. There have been some rather memorable ones over the years, but one of them was envisioned very different.

Heath Slater appeared on Stories With Brisco And Bradshaw and discussed the origins of 3MB. Slater came up with the idea of putting a stable together with him, originally wanting Johnny Curtis (better known as Fandango), Dean Ambrose and EC3 on the team. After pitching the three names, he was told that WWE already had plans for Ambrose and Curtis and that EC3 wasn’t happening. Three weeks later, Slater was told that Drew McIntyre and Jinder Mahal would be his band instead, as that is what Vince McMahon wanted. The team debuted on September 21, 2012 until June 12, 2014 when Mahal and McIntyre were released.

Opinion: In the grand scheme of things, 3MB didn’t mean much to WWE, but they were a goofy enough group that people remember them to this day. If nothing else, they are proof that just because wrestlers have to do something silly, they can still come back later and do something special, ala Mahal and McIntyre. The original lineup could have been interesting, though I don’t know if they would have been anything like what we wound up seeing.

What did you think of 3MB? How would the other lineup have gone? Let us know in the comments below. 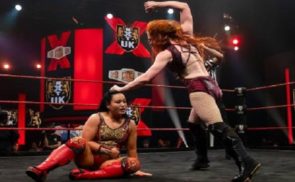