We’re still on the road to Victory Road and that means more of Ace Austin, which is not a bad thing. Tonight we have Tommy Dreamer vs. Austin with Dreamer possibly being added to the World Title match if he wins. That’s the kind of threat that Impact might actually follow up on, which doesn’t give me much hope. Let’s get to it.

In Memory of Daffney. That was a really hard one.

Ellering and Kaleb With A K start things off with Rachael wrestling him into the corner without much effort. A release gutwrench suplex drops Kaleb With A K for two and it’s Grace coming in for some standing clotheslines. Rayne gets in a cheap shot though and Dashwood gets to come in and take over. Grace powers out of a chinlock by slamming Rayne backwards but Kaleb With A K cuts off a tag.

A kick to the face cuts that off without much effort though and Wilde comes in to clean house. Wilde’s tornado DDT gets two on Kaleb With A K with Dashwood having to make a save. Back up and Rayne has to grab Kaleb With A K’s hands to block a German suplex, only to have Ellering break it up, meaning the German suplex can give Wilde the pin at 5:04.

We look at Deonna Purrazzo retaining the Knockouts Title at NWA Empowerrr and then attacking Mickie James at the 73rd Anniversary Show.

Tommy Dreamer talks about the time he took the ECW World Title from Christian Cage, though Cage pops up to say Dreamer didn’t pin him in that match. That’s true, but Dreamer just wants one chance to be the face of Impact Wrestling. He asks Cage to not get involved tonight because he wants to do it himself. Sure.

The rest of Decay is here, as is No Way’s Conga Line. Actually hold on as part of the Conga Line attacked Rosemary, because it’s Tasha Steelz in disguise. We come back from a break for the opening bell, with Steve slugging away at Bahh in vain. Bahh throws him down with ease and it’s off to No Way vs. Taurus. A Sling Blade drops No Way and a hard right hand has him in more trouble.

No Way gets in a quick tag to Bahh and sunset flips Taurus, who gets crushed by Bahh’s splash. A belly to belly lets No Way come back in for two and Bahh hits the running hip attack in the corner. Bahh drops No Way down into a legdrop for two on Taurus but a double clothesline gives him a breather. The hot tag brings in Steve to slug away as everything breaks down. Steve bites Bahh in the head and a middle rope DDT is good for the pin at 6:45.

Flashback Moment of the Week: Christian Cage b. Sting at Final Resolution 2007.

W. Morrissey doesn’t like Sami Callihan for saving Eddie Edwards. He does have a bit of respect for the two of them for hating each other….and here is Moose to interrupt. Moose agrees with everything Morrissey has said since he got here. Neither of them like Sami Callihan, but Moose is looking for an alliance instead of a friend. Glaring ensues.

Here is Moose for a chat. He doesn’t like that everyone, like Eddie Edwards, wants to be a hero. They have a long history together, but Moose is a different guy now. So get out here so Moose can teach him that the hero doesn’t always save the day. Cue Eddie so the brawl can be on. W. Morrissey runs in for the beatdown and a double powerbomb leaves Eddie laying. No Sami Callihan for the save, as per Eddie’s request.

No Way and Fallah Bahh didn’t know anything about Tasha Steelz attacking Decay. TJP comes in to reform the team with Fallah Bahh and is cool with No Way too. They’ll head to Swinger’s Palace next week.

Eric Young is ready to cure Rhino and chains him up in a prison.

The returning Crist is challenging after Alexander wanted to fight any former X-Division Champion. Alexander drives him into the ropes to start and catches a charging Crist in a powerslam. Crist sends him to the apron so Alexander goes up top, only to be pulled back down for a neckbreaker. The front facelock goes on for a bit and Jake plants him down again. Crist grabs the front facelock again but this time Alexander strikes his way to freedom in a hurry. Alexander rolls some German suplexes to knock Crist silly and Divine Intervention retains the title at 5:36.

Post match Alexander is asked why he put the title on the line. That’s because he has to so he is challenging people for the title. Cue Chris Sabin to say he is a big Alexander fan but Alexander is a one time champion, compared to Sabin’s eight title reigns. The challenge is on for Victory Road and Alexander is down for that. Makes as much sense as anything else right now.

Sam Beale is offering Brian Myers’ offer to find a new wingman and we see some applications. One of them looks like David Arquette.

The applicants are here and Brian Myers isn’t impressed. He makes a few random cuts, including one who likes Mojo Rawley. We get down to two, with one of them being Zicky Dice of NWA fame. The two of them (Dice and Manny Lemons) will be back next week.

Raju and Cardona start things off but it’s quickly off to Shera to run Cardona over instead. The big elbow crushes Cardona and it’s back to Raju, who is quickly slammed down. Green comes in to work on Raju’s arm before kicking some non-existent dirt into his face. A headscissors sets up a slap to Raju, who brings in Shera. That’s fine with Green as she slaps Shera into Radio Silence from Cardona. Raju posts Cardona though and a jumping knee finishes Green at 3:33.

Su Yung and Kimber Lee have turned Brandi Lauren into one of them. Maniacal laughter ensues but Yung doesn’t seem pleased.

Here are the Good Brothers for a chat. Karl Anderson tells the fans to sit down and shut their fat mouths. He knows the fans feel like they are seeing some rock stars but be quiet for a bit. They aren’t happy with Rich Swann and Willie Mack stealing a pin on them last week but Mack got powerbombed through a table for what he did. Mack is in traction right now so now his name is Willie Lack The Ability To Walk. Cue Rich Swann with a chair but referees are out there in a hurry to break it up.

Post break, Rich Swann has to be held back again so Scott D’Amore gives Swann a Bunkhouse Brawl with Karl Anderson next week.

If Dreamer wins, he’s in the World Title match at Victory Road and Madman Fulton is here with Austin. Dreamer is wrestling in a Dusty Rhodes mask because reasons. Austin takes him down for a kick to the back to start so the mask comes off to make things serious. A Cactus Clothesline puts them on the floor and Dreamer posts him hard. Fulton saves Austin from going into the barricade though and Austin kicks Dreamer in the face.

Back in and a powerbomb gives Austin two but Dreamer crotches him on top. A neckbreaker out of the corner gives Dreamer a breather and the slugout is on. Dreamer hammers away in the corner and bites Austin’s head, setting up a powerslam for two. An enziguri drops Austin again but he’s right back up with a springboard Fameasser for the same. Back up and Austin charges into a cutter but Fulton breaks up the cover. Dreamer posts Fulton but gets caught with the Fold for the pin at 7:44. 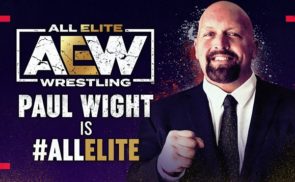 Why AEW All Out Almost Looked Very Different Last Night 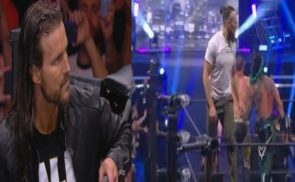