We’re back to the still fairly rare AEW pay per view schedule with an absolutely stacked show. There are three major matches this time around, including CM Punk vs. Darby Allin, Chris Jericho vs. MJF and Kenny Omega defending the World Title against Christian Cage. Let’s get to it.

Matt Hardy shoves Taylor into the corner because he wants Orange. He gets Luchasaurus instead so Jack Evans gets a rather fast tag. Luchasaurus sends Evans flying with a suplex and it’s off to Boy to send Evans into the corner. Quen and Yuta come in, with the former getting two off a running crossbody.

We get the big sequence of most of the people trying a hold at the same time to as much avail as you would expect. Luchasaurus comes back in to throw people around, including a knee to the face to drop Evans. Private Party and Hardy come in to take Luchasaurus down but Orange breaks it up with the slow motion kicks. That earns him a Codebreaker into a shooting star onto his back, followed by a trip to the floor. We get a short form parade of dives but Orange heads back inside for the hands in pockets comeback to drop Private Party.

Hardy is back in with a Twist of Fate but now it’s Jungle getting to clean house. Angelico and Luchasaurus put Evans and Jungle on their respective shoulders for a chicken fight but here is the Blade to interfere. Marko Stunt dives off of Luchasaurus’ shoulder to take him out, leaving Jungle to make Angelico tap at 8:34. 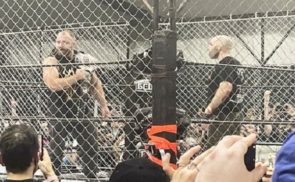