We are most of the way to Sacrifice and now we have a main event as Moose will challenge Rich Swann for the World Title. That would be the Impact World Title, as the TNA World Title now seems to be the official secondary title (at least for now) around here. That should be a heck of a match when they get the chance so hopefully the rest of the card looks as good. Let’s get to it.

The rest of Decay and Madman Fulton are here and the winner gets the X-Division Title shot against TJP at Sacrifice. Taurus gets jumped to start with both fellow villains standing on his chest in the corner. Some running dropkicks keep Taurus down but he pops up and tosses Bey into Austin into another corner. Back up and Bey offers a distraction, allowing Austin to hit a springboard kick to the head.

That’s enough to send Taurus outside for the stereo dives, meaning it’s Austin vs. Bey grappling away back inside. Austin flips out of a headscissors, followed by Bey doing the same. They both catch kicks at the same time so Bey heads to the apron, where Taurus pulls him down. Taurus catches Austin’s dive and slams him onto Bey on the floor to take over. Back in and Taurus strikes away, including a running elbow for two. Bey sends Austin to the floor and kicks Taurus in the head in the corner.

Taurus loads up a suplex on Bey but Austin is back in with a springboard dropkick to put all three down. Taurus Pounces Austin to break up the Fold and a heck of a pop up Samoan drop plants Bey. Austin catches Taurus’ charge though and sends him to the floor, where Taurus is holding his knee. Back up and Fulton grabs Bey, leaving Austin to hit the Fold for the pin at 8:07.

Jordynne Grace and Jazz are ready for Deonna Purrazzo and company but here are Fire N Flava to mock their losses. They will be at ringside tonight but Grace says let’s just make it a triple threat.

Brian Myers tries to talk to Matt Cardona, who is refereeing his match tonight. Cardona is calling it straight tonight though because he wants to keep it professional.

Kaleb With A K (still in the neck brace) is here with Dashwood. A shot to the back of the head just annoys Havok, who backs her into the corner as a result. Dashwood’s crawl through the legs is caught so she elbows Havok in the head. The Russian legsweep is easily blocked though and Dashwood is sent to the apron. Havok misses a charge and gets kicked in the face, setting up a neckbreaker over the middle rope.

We take a break and come back with Havok caught in the Tarantula to keep her in trouble. The Taste of Tenille gets two and she sends Havok face first into the mat for two more. Dashwood grabs a full nelson but Havok throws her down and gets a boot up in the corner. A backbreaker into a clothesline gives Havok two and there’s a kick to the head to put Dashwood down again. Kaleb gets up to offer a distraction though and the Spotlight Kick (with Havok leaning over for a long time) finishes Havok at 7:49.

Post match here’s Nevaeh to beat down Dashwood and Kaleb With A K.

Sami Callihan seems to be in Trey Miguel’s trophy room and says Miguel has no passion. He goes into an office and shoves over I guess Trey’s business partner. Now it’s time to go into Trey’s wrestling school and beat up a bunch of people. One of the students gets in his face but Sami doesn’t want to hear it and beats the student down as well. Another wrestler runs in and Sami backs off before offering to be his teacher instead. Sami tells the camera that the kid is in good hands.

It’s off to Swinger’s Palace, where TJP wants to know the odds on his match with Ace Austin. Cue Madman Fulton and Ace Austin, with TJP winning some bets on Austin asking various questions. Chris Bey comes in and gets in Ace’s face, but Johnny Swinger says no fighting until he gets odds on it. TJP wins a bunch of money off of that too.

Flashback Moment of the Week: Sting b. Rob Van Dam at Sacrifice 2011 to retain the World Title.

Eric Young scolds Deaner for losing to Jake Something last week and Joe Doering punishes him with violence. Young is only doing this because he cares. Deaner: “I know.”

It’s time for the Tony Schiavone/Khan announcement of the week, as they promote Dynamite and Revolution. Khan talks about how it is every promotion against THEM, though he won’t say who THEM is (because he can’t say WWE). Now he is the leader and we get multiple Forbidden Door mentions. More Dynamite plugs wrap us up, with Khan shouting a lot. Then Schiavone goes over a lot of the same material again in a quieter manner.

Video on Moose, who is now officially a World Champion. He knew he would always get here and now it is time for Rich Swann to be destroyed by Mr. Impact.

Finlay and Luster trade headlocks to start until Finlay dropkicks him into the corner. Anderson comes in to beat on Larry D. before handing it off to FinJuice for a Russian legsweep/big boot combination. Acey comes in and gets the double kicks in the corner from the Brothers. Finn comes back in but gets sent into the corner, allowing the villains to take turns. That’s broken up and it’s off to Anderson for the Magic Killer…but they take a bit too long and Thornstowe grabs a rollup for two. Now the Magic Killer connects for the pin at 4:01.

Post match, FinJuice and the Good Brothers have a big staredown.

Rich Swann talks about how Moose may be a monster, but he isn’t a World Champion. On paper, Moose is strong, fast and big, but he doesn’t have the heart.

FinJuice and the Good Brothers argue about how they almost lost. The Brothers want them to carry the bags but FinJuice wants to carry the titles. The title match is set for Sacrifice.

Matt Cardona is guest referee. Myers starts fast and goes after the arm, setting up a belly to back suplex. It’s already back to the arm but Edwards sends him outside, meaning Myers needs to grab a chair. That takes too long though and Edwards hits a big running flip dive over Cardona. We take a break and come back with Myers grabbing a chinlock, snapping Edwards’ throat across the top, and putting the chinlock on again.

Edwards fights up with some chops and a bridging suplex gets two. The Blue Thunder Bomb gets the same but Myers is right back with a Downward Spiral for two. Myers goes up, earning himself a Backpack Stunner for two. A reverse neck snap across the top lets Myers load up his elbow pad with a foreign object for the Roster Cut and….that’s a DQ as Cardona calls for the bell at 11:05.

Deonna Purrazzo isn’t worried about a triple threat match tonight. Or ODB for that matter.

Here’s what’s coming at Sacrifice and next week.

Non-title and there are a bunch of other people at ringside. Purrazzo is sent outside to start and we take a break less than thirty seconds in. Back with Grace getting double teamed in the corner but managing to send Purrazzo outside. Grace hammers away on Kiera, who she has to hold up for a bit. Purrazzo trips Grace down but gets chopped into the corner by Hogan.

The Fujiwara armbar is broken up in a hurry and Grace sends them both into the corner. That earns her a Fujiwara from Purrazzo so a rope has to be grabbed in a hurry. Hogan high crossbodies Purrazzo for two and then gets the same on Grace. Purrazzo takes Hogan down by the leg but pulls Grace down into a failed Fujiwara armbar attempt.

Grace hits a spinebuster on Purrazzo, who manages to block a suplex. A double clothesline sends Purrazzo and Hogan to the floor, meaning it’s time for everyone on the floor to get into a brawl. Grace dives onto everyone and takes Hogan back inside for a beating in the corner. Tasha Steelz saves Hogan from the Vader Bomb though and it’s Purrazzo sneaking in to steal the pin on Grace at 12:24.

Post match Grace and Steelz brawl to the back but here’s ODB to jump Purrazzo. ODB takes her down and poses with the title to end the show.

Overall Rating: D+. I’m not sure what to think of this one as they were trying to focus on a lot of things other than the main event scene and it didn’t go well. There wasn’t much worth caring about with this show and that was getting more and more obvious with each match. Just not a very interesting show and that’s one of the worst things you can say about any given episode. 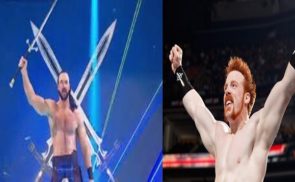