We’re still on the road to Rebellion and this week features the in-ring return of Josh Alexander against Matt Taven. Alexander is back in the company after a few weeks off due to visa issues and now he is probably going to need a small bit of build on the way to his World Title shot against Moose. Let’s get to it.

In Memory of Scott Hall.

The opening recap looks at Josh Alexander’s return and his match with Matt Taven being set up.

White and Shelley start things off with White still not giving him a handshake. Sabin comes in and a double dropkick puts White on the floor rather quickly. It’s off to Bey, who gets headlocked takeovered by Sabin, with Shelley tagging himself in for a kick to the ribs. The Guns start taking turns on Bey’s arm, setting up a couple of kicks to the chest for two. White’s save attempt lets the Guns grab stereo abdominal stretches before the villains are sent outside.

Sabin adds the big dive but White crotches him on top back inside. That means a big dive from Bey and the Guns are down on the floor for a change. Back in and White grabs a chinlock on Shelley before some alternating choking in the corner keeps Shelley down. Shelley is back up with a shot of his own though and the hot tag brings in Sabin to clean house.

Bey gets tied up in the Tree of Woe and a belly to belly sends White into him for a crash. The tornado DDT gets two on White but he’s back up with a suplex to send Sabin into the corner. Back in and Bey hits a torture rack neckbreaker for two on Sabin but the Art of Finesse is broken up. Everything breaks down and Shelley hits a Downward Spiral/DDT combination. Skull and Bones finishes Bey at 12:33, even with White diving in for the failed save attempt a split second late.

The ending is so close that commentary looks at it before and after the break.

Fallout from Maclin turning on Team Impact at Sacrifice and Anthony Carelli is on commentary. Rhino hits a clothesline to start and we take an early break. Back with Maclin getting in a neck snap and hammering away on the mat to take over. A DDT gives Maclin two and we hit the chinlock. With that broken up, Maclin misses a middle rope headbutt and Rhino starts the comeback. A belly to back suplex gets Maclin out of trouble for two but Rhino hits a vertical suplex of his own. The fans want the Gore so Maclin hits one of his own for the surprise pin at 9:17.

The IInspiration comes up to Kaleb With A K and know he was trying to help them at Sacrifice. Just get it right next time.

Rhino is annoyed at the loss when Heath comes in to suggest they get the band back together. Sure let’s do it.

Brian Myers is on commentary. D. powers him into the corner to start as Myers talks about the Buddy Rose Blowaway Diet. An enziguri drops D. to set up a slingshot elbow for two as Raj Singh comes out to watch. The fans are behind D. (still weird to hear) as he fights back and grabs a chinlock. Back up and a discus lariat gives D. two but Gujjar is back with an Irish Curse and a Samoan drop. D. is back up and sends him to the apron but a superplex attempt is broken up. Instead Gujjar hits his middle rope spear for the pin at 5:59.

Post match here is W. Morrissey to chase off Myers and powerbomb Singh through the table.

Ace Austin and Madman Fulton come up to Mike Bailey in the back and suggests an alliance once Bailey qualified for Ultimate X. Bailey is good with that and knows one of them will win the X-Division Title, though that doesn’t seem to be what Austin had in mind.

Honor No More is ready for Josh Alexander tonight when Alisha Edwards comes in. Alisha says Matt Taven can’t beat Alexander, who actually fights for something. She tells her husband Eddie that she hasn’t given up on him but Eddie says maybe Impact gave up on him.

Purrazzo is defending both titles and this is winner take all. They trade rollups for two each to start until Frost is knocked to the floor. Purrazzo grabs the ankle but Shaw slips out and grabs a headscissors. Frost comes back in but Shaw knocks both of them down to take over. Purrazzo gets posted, leaving Shaw and Frost to forearm it out.

After a double knockdown, Purrazzo is back in with a standing moonsault to both of them. Shaw gets caught in Purrazzo’s Fujiwara armbar but Frost kneebars Purrazzo at the same time, allowing Shaw to get to the ropes. Back up and Purrazzo gets knocked into the corner, leaving Shaw to get Cannonballed (Snowballed actually) in the corner.

That’s fine with Purrazzo, who German suplexes both of them at once. Purrazzo goes up but gets superplexed back down, which sends her rolling out to the floor. Frost ducks Shaw’s running knee and kicks her in the head, setting up the Blockbusters on Shaw. That doesn’t seem to matter though as Purrazzo hits the Queen’s Gambit to finish Frost and retain at 6:06.

Josh Alexander is ready for Honor No More and then promises to take the World Title back from Moose at Rebellion.

The Good Brothers want their rematch with Violent By Design for the Tag Team Titles so Scott D’Amore makes it for next week. And let’s make it a lumberjack match, with the winners defending their titles in an eight team elimination match at Rebellion.

Dice turns his back on Jonah, earning himself a crush and then the Tsunami to give Jonah the pin at 31 seconds.

Post match, PCO is wheeled out on a stretcher and sits up, despite wearing a neck brace. PCO comes to the ring, rips off the brace, and starts the brawl with Jonah. Security breaks it up but PCO breaks free and goes to the top for the big flip dive onto security on the floor.

James is ready to fight Steelz in a street fight next week. Chelsea Green nearly begs James to let her be in her corner but James turns her down again, citing Green’s injury.

Arie actually gets in a few shots before the spinwheel kick in the face takes her down. The Snowplow (all Russian references to its name are gone) finishes Arie at 1:01.

Zicky Dice thinks he has one major problem: he sucks as a wrestler. What he needs is a wrestling school.

Video for Johnny Swinger’s Dungeon wrestling school. Lance Storm pops up to say he does not endorse this place, which features a bunch of people in towels and various states of undress/leather gear (because it’s a different kind of, ahem, dungeon).

Maria is on commentary. Feeling out process to start with Alexander shouldering him out to the floor. Back in and Taven grabs a suplex for a fast two before sliding between Alexander’s feet to set up a dropkick. Taven takes him up top and snaps the arm across the top and we take a break.

We come back with Taven staying on the arm, including a seated armbar. Alexander fights up and rolls some German suplexes but Taven knocks him down again. The middle rope moonsault misses though and they’re both down for a bit. Alexander is back up with a northern lights suplex but the arm gives out on a C4 Spike attempt. Taven comes back with a Purple Thunder Bomb before countering another C4 Spike.

A kick to the chest gives Taven another knockdown but Alexander sends him to the apron. Alexander hits a running crossbody through the ropes to knock Taven outside but Taven is back in with as hot to the face. The Climax is countered into the ankle lock, sending Taven straight to the rope. Alexander takes him up top for a superplex, which he rolls through into the C4 Spike for the pin at 15:42.

We cut to Moose arriving at Josh Alexander’s house, where he asks Alexander’s wife to deliver the Rebellion contract to Anthem because their office is closed. Alexander’s son is terrified as Moose leaves to end the show. 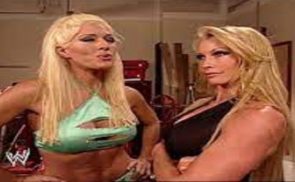 WWE Has Another Legend On Their Do Not Mention List