It’s Destination X and that means title for title with World Champion Lashley facing X-Division Champion Eddie Edwards in a winner take all match. Mike Bennett has promised to ruin the whole thing though and there’s also the possibility that Maria Kanellis will do something to further her issues with Dixie Carter. Let’s get to it.

We open with Final Deletion clips, including Jeff Hardy waking up. Matt goes down to the boat and names it Scarsguard as a thank you for saving him last week. Matt takes it out into the water with a bag containing Jeff’s remnants but the drone comes out, carrying the shirt Jeff was wearing to complete the package.

Braxton Sutter vs. DJZ vs. Rockstar Spud vs. Trevor Lee vs. Andrew Everett vs. Mandrews

Ladder match for the #1 contendership to the X-Division Title. Mandrews dives onto the Helms Dynasty as they come to the ring with DJZ doing the same thing for a big crash. DJZ stops Mandrews from grabbing the X but Sutter stops DJZ just as quickly.

Trevor goes for the belt on two ladders but they’re pulled away, forcing him into the splits for a new idea. Spud takes down a bunch of people with a chair but gets kicked in the head. A Sutter powerbomb knocks Lee silly, only to have Spud take him down with a belt to the back. We get the traditional Shane Helms interference to stop DJZ going for the belt, only to have DJZ shove the ladder over with Everett go crashing into the pile. DJZ pulls down the X to win at 5:55.

DJZ is proud of his win and promises to go win the title when Mike Bennett jumps him from behind.

Ethan Carter III is ready to fight Drew Galloway because talking is over.

Dixie Carter says they’re moving back home to Thursday nights next week with the start of the Bound For Glory Playoffs.

Eddie Edwards and Lashley are in the ring for a face to face showdown. Lashley says the World Title is the heart of Impact Wrestling and he’s the top of the food chain. All Eddie has done is tick him off but Edwards says he’s going to walk out World Champion. Lashley says this isn’t a movie and the underdog doesn’t win. The X-Division Title is real life but Lashley beats him down when the Wolves Nation is mentioned for the first time. The spear puts Eddie down and Lashley gets a chair, only to have Davey Richards return for the save.

Abyss has to choke Crazy Steve to calm him down as Steve is losing his mind about Rosemary kissing Bram last week. Tonight Abyss can take care of Bram and everything will be beautiful again.

Back at Matt’s house, he’s invited guests to his private movie theater to watch the Final Deletion. In another room, Reby pulls a book from the wall to open the door to Maxill’s room. She picks up the baby and drops down a fireman’s pole into the theater as we see the family and guests watch last week’s events.

Abyss hits some right hands to the ribs in the corner to start before sending him out to the floor for a crash. Steve pulls Bram’s hair out but Bram comes back with some right hands of his own. A chokeslam cuts off a comeback but here’s Rosemary to check on Bram. The distraction lets Bram roll Abyss up for the pin at 4:05.

Sienna is defending and Gail jumps her on the ramp because this is basically two singles matches at once. Gail is discarded (Don’t worry. She’ll be back to save the division soon enough.) so Sienna can stomp on Marti as Josh promises MORE from Matt’s house at dinner last night.

Marti gets two on Sienna with Gail making the save, followed by a quick Tower of Doom. Jade and Gail dive onto the heels before slugging it out in the ring. Gail avoids a Pele and gets two off a backsplash. All four are back in now with Marti hitting a Pedigree on Jade. Eat Defeat drops Marti but Sienna Pounces Gail to retain at 5:28.

Matt and his family had dinner and he promises to complete the deletion of Jeff.

We see the end of the Final Deletion.

Here are Matt and Reby to brag about their win last week. Matt has DELETED Jeff, who Reby brings out and shouts OBSOLETE over and over. Apparently Matt wants to keep Jeff around and bleed every dollar out of him by making him his mule. DELETE DELETE DELETE.

Mike runs him over to start but DJZ fires off right hands. Those go nowhere because he’s a lowly X-Division wrestler and can’t fight a heavyweight. A spinebuster gets two and we hit a chinlock for a few moments. DJZ fights up and headscissors him out to the floor for a flip dive. That’s enough for Bennett as he tries to walk up the ramp, only to be cut off by the X-Division. The distraction lets DJZ grab a rollup for the pin at 5:45.

Post match Bennett yells about wanting to ruin Destination X because that win really didn’t mean much. He promises to burn this place to the ground.

Bennett is on the phone and tells someone to get here tonight so they can burn it to the ground.

Here’s Galloway to call Ethan out for a fight, as in not a match. Ethan is ready go to as well and it’s on in a hurry. Drew takes it to the floor but gets suplexed. They trade some chops and Ethan pelts him with a chair. They fight backstage with Ethan getting the better of it until a bunch of people break it up.

Davey tapes up Eddie’s hands for the main event.

Both titles are on the line. Lashley shoves him around to start but his suplex is countered into a sleeper. That goes as far as your average sleeper is going to take you so Lashley sends him outside for a suplex on the ramp. Eddie is sent into the steps and we take a break.

Back with Lashley beating Eddie in the corner and choking on the mat until Eddie fights up with a tornado DDT. A low bridge sends Lashley to the floor and there are three straight suicide dives. Back in and Eddie gets two off a sitout spinebuster before kicking Lashley in the eye.

Eddie tries the Boston Knee Party but gets caught in a powerslam with the referee getting bumped. Lashley grabs a chair so here’s Davey for the superkick/brainbuster combo and a near fall. Cue Mike Bennett but MOOSE makes his debut (complete with the Moose name and entrance music) to lay out Davey. We’ll call it a no contest at about 15:00.

Result: Lashley vs. Eddie Edwards went to a no contest when Moose interfered (15:00)

And now, here’s Dixie Carter to end the show. The fans deserve a winner so there’s a rematch inside Six Sides of Steel with both titles on the line. 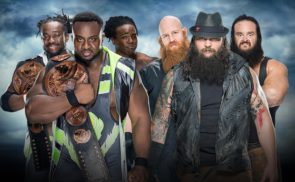 The New Day vs. The Wyatt Family Official For “Battleground” in Non-Title Match