This is another of those odd weeks where we should be past a pay per view but instead it’s a stand alone show which might feature a midcard feud not big enough to get on the actual pay per view. Or it might be an hour long look at the Bullet Club, which could be almost any given episode of the show. Let’s get to it.

The opening narration tells us that we’ll be back in two weeks with the Best in the World fallout. Therefore tonight is all about the Women of Honor division, which is almost never mentioned on the regular TV show.

Kay is better known as Sienna in TNA. Gallows (the Bullet Babe, as in Bullet Club) starts with Kitty, who claims to be 95 years old. Amber beats her down to start and shrugs off a faceplant before it’s off to Dobson vs. Kay with Allysin catching a cross body in a fisherman’s buster. Scott comes in and misses some kicks, allowing Dobson to dropkick her in the chest.

Sumie comes in for two off a nice northern lights suplex, followed by a double dropkick with Kay helping things out a bit. Everything breaks down and Gallows offers a distraction so Kay can kick Sumie in the face. Scott grabs something like Stratusfaction and we take a break. Back with Gallows grabbing an X Factor before stopping to say Too Sweet. Sakai gets in a fisherman’s buster and the hot tag brings in Mary as house is cleaned.

Everything breaks down again and we get a Tower of Doom, followed by the parade of finishers. Dobson stomps on Allysin’s foot and kicks her in the head, setting up the Kaiju Killer (split legged moonsault) but Gallows makes a save. Kay gets in a discus lariat for the pin on Dobson at 9:45.

This is Faye’s debut. Jackson isn’t sure what to do to start so ODB slaps her (own) chest and no sells a clothesline. A running splash in the corner crushes Jackson again and a better clothesline puts ODB down for two. We’re two minutes in and the announcers already declare it gutcheck time. Jackson hits three straight running Umaga Attacks in the corner (the Triple Spun Milkshake) for two but she can’t get ODB in a fireman’s carry. Instead ODB hits the middle rope Thesz press for the pin at 4:14.

Inside ROH is a pair of dueling promos from Hania and Mandy Leon before their match tonight.

Hania is billed as a huntress who looks like she’s carved out of stone. Feeling out process to start until a test of strength doesn’t go anywhere. We get the suplex to break it up with both women laying on the mat and popping their shoulders up at two.

Hania flips her away and the overly choreographed stuff continues. They trade rollups for two each until Leon headscissors her out to the floor, only to have Hania trip her up and send Leon into the barricade. Back from a break with Hania getting two off a springboard missile dropkick. A victory roll gives Mandy the same but Hania gets two more off a spinwheel kick.

Mandy grabs a neckbreaker and hangs onto it for a fairly unique submission, followed by a Stratusphere but she misses a moonsault. A double clothesline puts both of them down until Hania tries some YES Kicks. Mandy shrugs them off and grabs a bulldog, only to eat more kicks to the face. They trade reverse DDT attempts, only to have Mandy counter into a Koji Clutch. It’s right next to the ropes though so Hania gets in a Codebreaker for the pin at 13:46.

BJ Whitmer talks about how awesome Kelly Klein is and says her name over and over again in an old school manager trick. The promo is about how strong of an athletic background she has and how serious she is about her training. That tells me more than I know about most of the women on this show in about thirty seconds.

Taeler Hendrix is tired of hearing about Klein because this is her company and we get in the ring with her.

BJ Whitmer and Truth Martini are in the respective corners. Klein grabs a quick abdominal stretch but Taeler reverses into one of her own. Hendrix grabs a rear naked choke but gets broken up as we take a break. Back with Klein sitting on the top rope with a chinlock before Hendrix cartwheels into a superkick. Kelly charges into a kick as well and a palm strike staggers her again. A spinning kick to the face gets two for Hendrix before she kisses Klein to set up a Tombstone for two. Klein doesn’t seem to care for the sexual assault and grabs a guillotine choke for the tap out at 6:32. 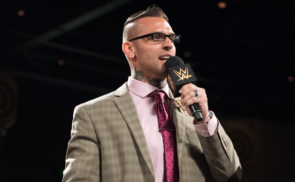