That’s what’s next. Super ShowDown has come and gone and while the show had some positives, the ending has been discussed far more than anything else. The show’s main event featured Goldberg defeating the Fiend to become the new Universal Champion in less than three minutes. The match was a rather decisive win for Goldberg, though Fiend popped up after the match was over. We now may know what is next for him.

The Fiend is, nearly by definition, an evil monster. He does all kinds of horrible things to people and keeps right on going. This creates a very different aura to him and there is nothing like him at the moment. However, at some point someone good has to stand up against him. Goldberg is a lot of things but he isn’t your traditional hero. Someone else might be waiting on the Fiend though and it could make for a long feud.

According to Wrestling Observer Radio, the current plan is to have Fiend face John Cena at WrestleMania 36 before moving on to a long feud with Roman Reigns, which will last most of the summer. At the moment it is not clear how Fiend’s match with Cena will play out, or if the feud with Reigns will be for the Universal Title. Cena is scheduled to appear on this week’s SmackDown.

Reigns and Wyatt have met before. Check out one of their previous matches:

Opinion: This isn’t the biggest surprise and it’s also not exactly something I’m interested in seeing. They could have told almost the exact same story without the Goldberg title win, which makes it fairly unnecessary. I also can’t say I’m surprised that it still comes back around to Reigns. That seems to be the case every single time and it gets annoying in a hurry, even if it’s inevitable.

Do you like this plan? How do you see it coming out for the Fiend? Let us know in the comments below.

Legend Possibly Returning To The Ring For WrestleMania 36 Title Match 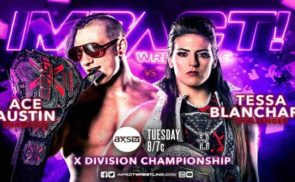