That’s just great to see. This has been a hard week for wrestlers and wrestling fans with multiple deaths throughout the wrestling world. The most prominent was former WWE wrestler Shad Gaspard, who passed away in the ocean just outside of Los Angeles. It was a shocking announcement and was made even worse when news broke about what caused Gaspard’s death. Now though, someone has tried to make things a little better.

The details of the story are what made Gaspard into a hero upon his death. Gaspard and his family were out at the beach with both Gaspard and his son in the water. The waves got a bit too strong though and they needed to be rescued. The rescue workers came to Gaspard first but he told them to go save his son. As they did, Gaspard was taken down by another wave and never came back. As a result, the rest of his family was in need, and the wrestling world has come together.

Since Gaspard was officially announced dead, a GoFundMe has been established to help take care of Gaspard’s family. The goal was set at $100,000 and more than $128,000 has been raised in less than three days. This includes a donation of $40,000 from someone only named CTC RIP. While there is no confirmation of who made the donation, there has been speculation that it was John Cena, who teamed with Cryme Tyme for a few months in 2008 under the name Cryme Tyme Cena Nation. AEW’s Tony Khan and Chris Jericho also made large donations totaling $15,000.

This is something that deserves more attention. Check out a tribute to Gaspard and some of the CTC’s time:

Opinion: I’m not sure if this is something Cena did but there are probably not going to be many people willing to donate $40,000 for a wrestler who wasn’t the biggest star. Cena is known for his charity work, but even if it wasn’t him, it’s great to see people like Khan and Jericho stepping up to help the family of someone who died a hero. It was a horrible week, but thankfully some people are helping ease the burden just a bit.

Do you think it was Cena? What did you think of Gaspard’s career? Let us know in the comments below. 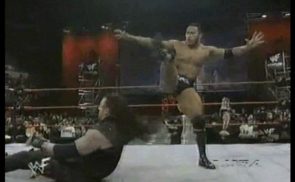 The People’s Elbow Was A Rib On The Undertaker?