That didn’t take long. There are a lot of people working for WWE, but that number is a lot lower than it was about six weeks ago. Back on April 15, WWE released several wrestlers from their contracts while also furloughing a bunch of backstage producers. It makes sense given that there are far fewer events taking place, but at some point those producers would be brought back. One is coming back in a different form.

Arguably the biggest, or at least most famous, name on the list was Kurt Angle. Despite not being an active wrestler in over a year, Angle is still one of the biggest names in all of wrestling and a true legend. He has a resume that no other wrestler can offer and that is the kind of thing that has value to WWE. If nothing else he can bring some serious star power, and that will be the case again next week.

As announced on WWE.com, Angle will serve as guest referee for next Wednesday’s cage match between Matt Riddle and Timothy Thatcher. The match will have special rules, with no pinfalls and the match only being able to end via submission or knockout. Thatcher challenged Riddle to face him in a rematch after Riddle pinned him last week. Riddle agreed to face him, albeit inside a cage.

The team came together and fell apart in a hurry. Check out how we got here:

Opinion: It’s good to see Angle back, but this also seems to be a play for popping a rating, even if Angle appearing doesn’t feel all that special anymore. If nothing else, it’s nice to see him still in the fold, but at the same time there are so many other people who were put on leave who don’t have the same history as Angle. They could probably use the appearance a lot more, though Angle is kind of tailor made for this. In other words, there are some people who I’d rather see here, but Angle makes the most sense.

What do you see Angle doing in the match? How will the match play out? Let us know in the comments below.

AEW Double Or Nothing 2020 Preview Predictions And Thoughts 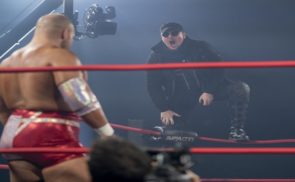