It can happen to anyone. As bad as it sounds, the reality is that injuries are one of the few universal problems for any wrestler. You never know when you might see someone get hurt and that is never a good thing to see. Unfortunately you can see someone get hurt at any time and they can be on the shelf for a good while. That is the case again, and now it is not sounding like the best news.

This week on NXT, Vic Joseph announced that Odyssey Jones had suffered a ruptured patella tendon. Jones has already undergone surgery to repair the injury, which will put him out until the fall. The injury took place during a match on a recent 205 Live taping, which never aired. Jones’ most recent televised match took place the December 28, 2021 edition of NXT.

Opinion: This is one of those things that happens on occasion, but it doesn’t make the situation any better. Above all else, what matters most is Jones getting back to full healthy. He was showing a lot of potential before he was put on the shelf and that makes it even worse. Jones could be a heck of a star in NXT and it will be nice to see him back in the ring when he heals up.

What do you think of Jones? What should he do when he gets back? Let us know in the comments below. 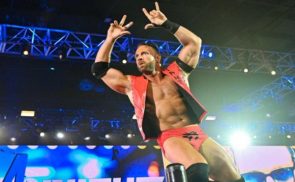