It’s the go home show for the Royal Rumble and I don’t think that is going to mean much for most of the people around here. NXT is in a different world than almost anything that happens on the main roster and in a way that’s a good thing, as they can do some positive stuff on their own. Let’s get to it.

MSK is next to the Dusty Cup and ready to win it again. Now they know what it takes to get back to the top of the mountain thanks to Riddle, but DON’T TOUCH THE CUP!

Carter and Kushida start things off with neither being able to get anywhere. It’s off to Lee, who immediately gets punched down by Jiro. Jacket Time takes him into the corner to start up the beating and it’s a double bulldog to give Kushida two. Jiro gets taken down in the corner though and it’s Carter hitting a Bronco Buster, which the fans don’t seem to like very much. Some double teaming takes Jiro down and we take a break.

Back with Jiro getting suplexed down, setting up a kick to the chest. There’s the running shooting star for two and it’s back to Lee, who gets caught in the belly to back kneeling piledriver for two. Lee fights up and brings in Carter to clean house. The push moonsault is countered into the Hoverboard Lock but Carter drives him into the corner for the Blockbuster Hart Attack and the pin at 11:32.

Zoey Stark tells Io Shirai she needs to find a new partner because Stark’s knee isn’t ready yet. Shirai doesn’t want to, but here is Tiffany Stratton to mock both of them. Stratton is ready to beat Shirai tonight, sending Shirai into a rant.

Video on Cameron Grimes wanting to beat Tony D’Angelo and move on to get the North American Title.

Legado del Fantasma is in the ring with Santos Escobar mocking Bron Breakker. People make fun of him because of his family and his poor math skills but he is already billed as a star. Escobar is a real star but here is Breakker to interrupt. Breakker gets in Escobar’s face and tells him to callate because the champ is speaking. Just issue the challenge already because he’ll accept it. Escobar says it’s on his time and leaves, only to have his goons jump Breakker. This doesn’t go very well and Breakker stands tall.

Video on Boa vs. Solo Sikoa.

No DQ and falls count anywhere with Boa jumping him with a kendo stick to start. A bunch of weapons are thrown in but Sikoa hits a Samoan drop. Everything but a single chair is cleared out so Boa wins a tug of war and beats Sikoa down again. A butterfly suplex onto a trashcan lets Boa set up a table at ringside but the delay lets Sikoa fight up. They fight into the back with Boa sending him into a ladder, which is then rammed into Sikoa’s chest.

Another shot misses though and Boa is rammed into a steel door. Sikoa goes outside and locks the door behind him so Boa opens the damaged garage door. Sikoa is right there with a blast from a fire extinguisher and they head back into the arena. Boa is sent into some chairs in the corner and a superkick takes him down again. The Superfly Splash is broken up with a crotching though and they head outside again. A Samoan drop sends Boa onto the announcers’ table and it’s a Superfly Splash to put Boa through another table for the pin at 8:04.

Video on Imperium, who talks about how it is time to move on from the past and fear the name of Gunther.

Hudson starts fast and hammers away, setting up a side slam. A Razor’s Edge finishes for Hudson at 1:08.

Post match here is Dante Chen to say he’s coming for Hudson, albeit respectfully. Referees break it up but Hudson chop blocks him down.

Persia Pirotta likes Duke Hudson with short hair but Indi Hartwell tells her to focus. Kay Lee Ray comes in to suggest she wants to beat up Mandy Rose with a baseball bat. Or just pin her.

Legado del Fantasma is unhappy with Bron Breakker and the challenge is on….for him to face Joaquin Wilde and Raul Mendoza. He doesn’t have any friends so it’s not worries.

Ray wants Mandy Rose to start but Jacy Jayne tags herself in instead. That’s fine with Ray, who drives her into the corner for the tag off to Hartwell. A kick to the head rocks Jayne so Rose comes in, only to get backbreakered by Pirotta. There’s a kick to the head and it’s back to Ray, sending Rose bailing to the floor.

Ray is left alone in the ring so it’s a huge dive to the floor to take all three down at once. Back in and Dolin gets caught in the corner for a beating, only to drive Hartwell into the wrong corner. Some Kawada Kicks knock Hartwell silly but she’s back with a side slam to Rose. Jayne breaks up the tag though and Dolin takes her down for two.

We take a break and come back with Hartwell still in trouble and Jayne hitting a running neckbreaker. They chop it out and knock each other down so the tag is off to Pirotta to clean house. Everything breaks down and it’s Ray superkicking Rose before grabbing the bat. The bat hits the steps and the post and Ray chases her to the back. That leaves Dolin to small package Pirotta for two, only to get kicked in the face. The fireman’s carry faceplant finishes Dolin at 13:53.

Edris Enofe and Malik Blade can’t believe they have made it to the semifinals of the Dusty Classics and they could go all the way. Enofe seems interested in Toxic Attraction though and somehow he loses his shirt.

Earlier today, Raquel Gonzalez was training when Cora Jade came in to ask to be her partner again. That still won’t happen because Gonzalez can’t trust her. Jade loads up a slap but it gets blocked, with Gonzalez getting serious.

Drake shoves Chase down to start so Chase flips him around by the wrist. The spelling stomps have Drake in more trouble and it’s time to alternate on the arm. Some Flip Flop and Fly stagger Drake again but Gibson pulls him to the floor. A spike shoulder breaker put Chase down but he’s fine enough to roll over for the tag off to Hayward. House is cleaned but it’s a double Codebreaker to finish Hayward at 5:10.

Post match here is Von Wagner to jump Chase and Hayward. Robert Stone comes in to say Wagner is under new management.

Grayson Waller, with his bodyguard Sanga, is ready to take out LA Knight, who is still under a restraining order.

Odyssey Jones has undergone knee surgery and will be out of action until the fall.

Shirai doesn’t see sure of what to think of Stratton. A wristlock has Stratton flipping away and she kicks Shirai down, leaving commentary stunned. The chinlock has Shirai in more trouble and even the fans chanting can’t bring her back up. They get to their feet with Stratton shouting a lot, only to get palm struck into the corner. A slam sets up the Moons Over Moonsault for the pin on Stratton at 4:17.

Malcolm Bivens thinks Gunther is a stupid name. Bivens: “It should have been DUMBA**, in all caps!” This is a new beginning and it’s time for the team to take out Imperium, including Ivy Nile stretching him to his mother’s house.

Tiffany Stratton is on the phone with her dad and complains about the referee. She runs into Wendy Choo, who thinks the referee had a point. Stratton slaps her cup away, sending Choo into some whining about her free refill.

The winner gets Carmelo Hayes (on the balcony with Trick Williams) for the North American Title in the future. D’Angelo starts fast by snapping off a suplex, setting up a choke in the corner. Grimes gets planted down again and we take a break. Back with Grimes hitting him in the face but getting punched in the ribs. The waistlock goes on but Grimes fights up and hits a bunch of forearms.

D’Angelo is rocked for a change and Grimes hits his flipping powerslam for two. Back up and the threat of the Cave In sends D’Angelo outside. That’s fine with Grimes, who grabs a hat. Cue Pete Dunne with a 2×4 to hit D’Angelo in the hand, allowing Grimes to hit the Cave In for the pin at 11:35 (possibly while thanking D’Angelo at the same time).

Bron Breakker is leaving when Legado del Fantasma pops up in their SUV. Breakker is ready to fight but Tommaso Ciampa comes in to even the odds a bit. Breakker says the math checks out for him as Legado leaves to end the show. 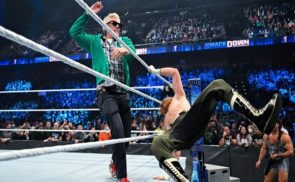