It’s not permanent. Celebrities have a long history in the WWE, as a good portiton of the original WrestleMania was built on the celebrity involvement. The tradition continued for years to come and is still a big deal today. Sometimes you see celebrities get in the ring, which can make for some interesting moments. That seems to be the case again, but it will not be something you should get used to seeing.

As previously announced, actor Johnny Knoxville will be competing in this year’s men’s Royal Rumble match. According to the WrestleVotes Twitter account, Knoxville’s appearance will be a one off and he is not expected to be back for any more appearances, including WrestleMania. At the same time though, WWE is planning on having another celebrity appearance for WrestleMania, though the person is not yet known.

Source states Johnny Knoxville’s Royal Rumble involvement is slated to be Rumble only & done on Saturday. However, WWE is indeed working on another celebrity appearance for WrestleMania. I asked who & couldn’t get a name. Either b/c it’s “top secret” (unlikely) or it’s undecided.

Opinion: I don’t know if this is a huge shock, but ultimately Knoxville is harmless. He isn’t going to do anything serious at the Rumble and he is going to get them some minor publicity. It is no worse than what Drew Carey did 21 years ago and I don’t think anyone is expecting anything less. Maybe he contributes to an elimination and that’s about it, which isn’t going to hurt anything.

What do you think of Knoxville’s involvement? What is your favorite celebrity appearance in WWE? Let us know in the comments below. 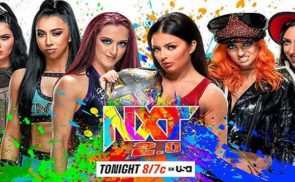