You might want to close your eyes. The Wednesday Night Wars have changed the way the wrestling world works in a good way. Every Wednesday night now offers a variety of wrestling the likes of which we have no seen in a good while as NXT and AEW Dynamite go head to head for two hours. That makes for some interesting shows, but some of the interest might be lacking next week.

With so many television shows going at once and considering the Coronavirus pandemic, it makes sense to tape some content in advance. That was the case earlier this year, when several shows were taped weeks if not months before they were set to air. There are positives and negatives to this idea, with one of the negatives being the chance for stories to get out. That is the case again this week.

Next week’s AEW Dynamite has been taped in advance and spoilers for the taping have leaked. The show will feature the second round of the #1 contenders tournament, with the finals being announced for Full Gear, plus Cody defending the TNT Title against Orange Cassidy in a rematch from their time limit draw. The spoilers come from a Reddit user named SpaceForce1, who has released accurate spoilers for more of this year. Here is what to expect this week, courtesy of HeelByNature.com:

Show opened with Wardlow vs. Page in the tournament semifinals:

Back and forth early. Page gets dumped outside and comes back in with a buckshot lariat attempt, but Wardlow ducks it and hits a big clothesline. Wardlow hits the F10, but Page rolls out of the ring. Wardlow pulls him back in from the apron and tries to hit the F10 off the top, but Page fights out and hits a superplex. Page hits a Buckshot Lariat, but it only staggers Wardlow. Page runs to the opposite side and hops out to hit a second one, which takes Wardlow down. Page covers him and wins, advancing to the finals.

Kingston out first with a promo. Says “how dare they go to commercial when I’m up next” and “how dare Moxley not even show up when I’m out here fighting the week before our match”. Sydal got in some good offense early, but Kingston eventually overpowered him and took control. Sydal got knocked around a bit, but eventually fights back with kicks, a standing moonsault, a hurricanrana from the top, and a meteora from the top. Kingston keeps kicking out and eventually locks in a submission for the win.

Jericho out first with a jacket only he can pull off. Britt Baker gets to ask a question and fangirls a bit before insinuating that MJF might be trying to trick him. Jericho says he’s aware of MJF’s past and says he’s a friend, but he’s not privy to the Inner Circle’s private business yet. Peter Avalon gets a question and just straight asks to join Inner Circle. They laugh him off the mic. Next question is from a special guest, who is back and better than ever. Bischoff asks MJF what he can do for the Inner Circle, and MJF replies “One word. Friendship”. Bischoff follows up by asking MJF what the Inner Circle can do for him. MJF says he’s the total package, but his one weakness is that he’s not the best team player. He says that joining Inner Circle will teach him how to be a better teammate. Bischoff starts another question by calling Jericho a primadonna and Jericho cuts him off. Schiavone tells Jericho to shut up and that Bischoff has the floor. Bischoff tells MJF that he has the same primadonna characteristics and asks him what will happen if he joins Inner Circle and he and Jericho butt heads. MJF dodges the question and instead runs down a list of all the things he’s done recently for Jericho, including “giving you the best segment of your career last week”. MJF asks Jericho flatly “what haven’t I done” to deserve a spot and Jericho replies “you haven’t beat me”. Jericho challenges him to a match at Full Gear, and if MJF can win, then he’s in. MJF says that it’s the biggest opportunity of his life and that he’ll do anything to win. Santana and Ortiz run down MJF and tell him that just because Jericho is entertaining this whole thing doesn’t mean that he’ll ever fit in with the Inner Circle. Santana and Ortiz demand a match next week against MJF and Wardlow to close the segment.

Cody vs. Orange Cassidy in a Lumberjack match for the TNT Championship:

Typical match for both guys with lots of outside spots for the Lumberjacks to get involved. Cody superplexed OC to the outside into the lumberjacks. Back I side, Cody hits a springboard cutter for a two count. OC counters into a stunner and lumberjacks eventually start getting involved in the ring. OC takes an accidental pump kick to the face and Cody takes advantage to pin him. As soon as the match ended, all the lumberjacks flooded the ring and brawled.

Tay Conti vs. Abaddon: The match was stopped abruptly due to a serious injury. Not gonna speculate, but it was bad and resulted in hospitalization. This match probably won’t air.

Shawn Spears wins a 30 second squash that may have been a last minute scramble filler to air instead of the women’s match. Scorpio Sky out after to attack Spears.

Kenny Omega vs. Penta El Zero M in the semifinals of the tournament:

Penta replaced Ray Fenix, likely because of the bump that Fenix took last night during their match when he attempted that ridiculous spinning rana from the top and landed on his head. Not sure how he was cleared to finish that match and then not cleared tonight. Something else may filmed backstage to explain the swap.

Kenny with another ridiculous intro package from Justin Roberts with more Cleaner stuff. Match starts with trading chops. Slow start, likely more filler for the time that was planned for the women’s match. They eventually get going and Penta hits a suicide dive to the outside. Penta in control early until Kenny hits a hurricanrana and his own suicide dive outside. Back in the ring, Penta takes control again and perfectly hits the springboard slingblade, which is rad as fuck. Pents goes up top and runs the ropes for some unique offense, but Kenny regains control with a half-nelson suplex followed by a powerbomb and a low dropkick for a two. Kenny hits the V-trigger and goes for a One-winged Angel, but Penta counters. They brawl on the top rope as Kenny tries a superplex, but Penta knocks him off and onto the ramp outside. As Kenny tries to climb back up, Penta leaps from the top and hits a Canadian Destroyer off the top and onto the ramp. Crazy. They move back inside with Penta in control, but Kenny hits a counter and tries another One-Winged Angel. Penta drops down out of the tower and locks in a sleeper. Kenny fights out and goes for a third attempt at the One-Winged Angel, this time hitting it for the win. Great match. As most of you probably guessed, Omega vs. Page in the final for a shot at the AEW World Championship.

This should be a big one. Check out what set this show up:

Opinion: This is about what would be expected as the tournament hasn’t been the biggest surprise in the world so far. Omega vs. Page sounds like an interesting final and the Cody vs. Cassidy match makes sense. I’m curious to see where we are going on the way to Full Gear, and they don’t have much time left to set things up. At least we should be having a good Dynamite on the way there.

What do you think of the show? What interests you the most? Let us know in the comments below. 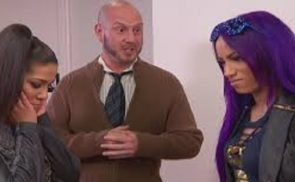