WATCH: Goldberg Breaks Down In Tears Over Diamond Dallas Page

It’s a touchy subject. There are all kinds of wrestlers throughout history but there are only a handful of wrestlers who are going to be remembered by many. In both the previous and current generation, Goldberg was one of the most memorable names who made as much of an impact in such a short time as any, at least partially due to his cyborg like nature. Now though, he is showing a very different side of himself.

Goldberg’s career in WCW lasted a few years but most of his matches were short and to the point, with Goldberg often winning in mere seconds. There were a few matches which lasted longer though and one of his most famous was at Halloween Havoc 1998 against Diamond Dallas Page. Goldberg retained the World Title but the match and Page himself left quite the impact.

This is something you don’t see very often. Check out Goldberg talking about Page (Page’s segment begins at around 26:45 and Goldberg’s starts at 40:35):

Page was a guest on this week’s edition of the Bump for an interview, plus people talking about what he meant to them. This included Goldberg, who appeared in a pre-taped video where he spoke about how much he reveres Page. At the end of the video, Goldberg broke into tears, talking about how he learned from Page, who had such knowledge and passion for the wrestling business.

And then there’s this. Check out the match which got them together:

Opinion: That is the kind of thing that you do not see very often and Goldberg is the kind of person who never shows such emotion. In addition, how much does this say about Page? He is already known for his in-ring abilities and efforts behind the scene with DDP Yoga and people like Scott Hall and Jake Roberts. Having this many people say great things about him shows you that there is something there, and it is rather awesome to see.

What do you think of Page? When will Goldberg wrestle again? Let us know in the comments below. 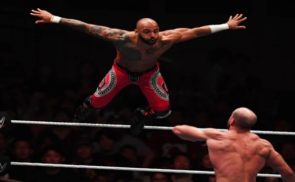 Insane Video: Ricochet Shows Off His Athletic Abilities In Training