Welcome back. There have been a lot of wrestlers throughout WWE’s history and some of them have been quite the successes. While it might not be an exact science, one of the best ways to gauge a wrestler’s success is through the championships they have won, particularly World Titles. This week saw the return of a former World Champion in a surprising moment.

The main event of this week’s Monday Night Raw saw Theory and Seth Rollins team up to face Bobby Lashley and Riddle. During the match, former World Heavyweight Champion Dolph Ziggler came to the ring to watch. Later, Theory rolled Riddle up and put his feet on the ropes, only to have Ziggler break it up, allowing Riddle to get the pin. Following the match, Ziggler superkicked Theory to end the show. There is no word on any match between Ziggler and Theory.

Opinion: This is quite the surprise and I’m not sure where it is going. I don’t mind having Ziggler back, but what matters is giving Theory something to do on the way up to the next level. Have him face Ziggler in a series of good matches and then move on to something more important. It has worked before and this was a bit of a different style of Ziggler, which could be a positive change.

What do you think of Ziggler’s return? Where do you see it going? Let us know in the comments below. 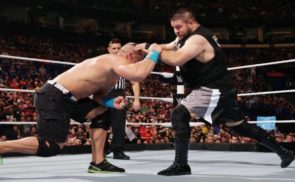