That’s a way to go. There are a lot of wrestling shows that take place on any given week. That means there are all kinds of ways to build them up, meaning the different promotions need to come up with something fresh. Sometimes these ideas are not ones that a wrestling company comes up with on their own, and that seems to be the case again this coming week.

AEW has announced that Eddie Kingston and Chris Jericho will face off this week on Dynamite. The match will be a barbed wire death match with the rest of the Jericho Appreciation Society suspended above the ring in shark cages. According to Wrestling Observer Radio, this is the result, of Discovery wanting to tie the show in to their Shark Week. This is what AEW came up with to satisfy their request.

Opinion: That’s certainly unique, but really what else was there for AEW to do? Shark Week and professional wrestling don’t have many things in common so this was about as good as they could have done. If nothing else, maybe the match itself can make up for the kind of lame idea, but it isn’t like this was some brilliant concept in the first place. Granted barbed wire and sharks might not go together that well either, but I don’t know what else there was here. 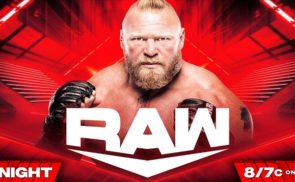