Mysterio is a fast learner. In a company as big as WWE you are going to see a lot of wrestlers coming and going. There are all kinds of wrestlers up and down the roster and that is always going to be the case. Sometimes you will see a new wrestler show up and surprise a lot of people. That was the case this year as a new star showed up, but it turns out that he was even more of a surprise than expected.

Earlier this year, Dominik Mysterio made his in-ring debut and was instantly thrown into a feud between his father Rey Mysterio and Seth Rollins. That was putting Dominik in some deep water in a hurry but he has done rather well for himself and certainly seems to be comfortable in what he is doing at the moment. Dominik has done rather well and now that is even more impressive.

During an appearance on the Chasing Glory podcast, Rey revealed that Dominik was planned to debut on the main roster in 2021 but was put into the Rollins storyline because the story was perfect for him. At the time of his debut, Dominick had already been training for three years. Dominik made his in-ring debut in a losing effort in a street fight against Rollins at Summerslam.

Dominik has been impressive so far. Check out what he has done during his time on the main roster:

Opinion: That’s all the more impressive and that’s a good thing to see. Dominick hit the ground running and you can see that he has been well trained for a long time before he got in the ring. You never know what you are going to see when someone makes a sudden debut like this and thankfully Dominik has done rather well in his time so far. He has a long way to go, but a good start is more than a lot of people get.

What have you thought of Dominik so far? What is next for him in WWE? Let us know in the comments below. 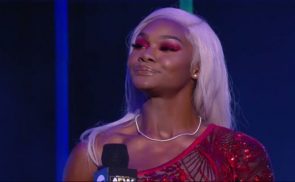