We’re still in California and this week’s Dynamite is going to be a bit tough to follow. There is a good chance that we are going to get some solid matches though, as tends to be the case around here. Rampage can be rather fun when it comes to focusing on some of the lower level stuff and that might be what happens again this week. Let’s get to it.

Isaiah Kassidy, Stokely Hathaway and Matt Hardy are here with Page. Chris Jericho rants about the fans singing along with Jungle Boy’s theme song as Page tries an Ego’s Edge out of the corner to start. That’s broken up and Page is sent to the floor, where he pulls Kassidy in the way of a dive. Back in and Page catches Jungle Boy on top but a dropkick puts him right back down.

Hold on though as Hathaway interferes but blames Hardy, allowing Page to whip Jungle Boy into the barricade. That works so well that Page does it again, though he does mix it up by going to a different side of the ring. Jungle Boy gets posted hard and a gorilla press drop back inside makes it worse as we take a break. Back with Jungle Boy firing off some chops but his back gives out to leave them both staggered.

Page slams him down again and mocks Hardy a bit, only to have the Twist Of Fate countered into a failed Killswitch attempt. Jungle Boy hammers away in the corner but a Hathaway distraction lets Page hit a Twist Of Fate for two. The frustrated Page sends Jungle Boy outside in front of Hardy but cue Hook to even things up a bit. Page uses the distraction to grab a rollup, along with Hardy’s hair for leverage. Hardy shoves him off though and a sunset flip gives Jungle Boy the pin at 10:11.

Post match Hathaway and Page yell at Hardy, who says he didn’t cost him a match. Page says Hardy can make this up to him in a tag match on Dynamite. Hathaway: “Until then, Matt Hardy, YOU’RE ON TIME OUT!”

Here is Ortiz to find out what is going on with Eddie Kingston. After blaming the House Of Black for having Kingston to the point of hitting a woman with a chair, Ortiz calls Kingston out. Cue Kingston, chair in hand, so this could get violent fast. Ortiz wants to know why Kingston has not been talking to him, but now he wants to hit a woman with a chair. Kingston was raised better than that and their mentor Homicide taught them better than that. Something in there was too far for Kingston, who cuts Ortiz off with a chair shot. Another shot leaves Ortiz laying and Kingston leaves.

They fight over wrist control to start as commentary talks about PWG. Some flips don’t get either of them anywhere so Mack hits the Samoan drop into the missed standing moonsault. Cage is back up with a running kick to the face, followed by the enziguri in the corner. There’s the German suplex into the corner and a running boot in the corner rocks Mack again. A Rock Bottom onto the apron lets Cage pose as we take a break. Back with Mack kicking him in the face and grabbing a Sky High for two. Cage is fine enough to come back with an F5 for two of his own and a powerbomb into the Drill Claw finishes Mack at 9:07.

Leila shoulders Jaida down to start and it’s off to off to Jordyn, who gets caught in the corner for the running dropkick. Jade comes in to throw Jordyn around, setting up Leila’s neckbreaker. An X Factor hits Jaida but Jade wants back in. Jaded finishes Jaida at 3:17.

Video on Action Andretti vs. the Jericho Appreciation Society. Daniel Garcia promises to take him out.

Sammy Guevara is on commentary and if Garcia wins, he replaces Guevara in a tag match on Dynamite. Garcia jumps him to start but gets chopped in the corner for his efforts. A hurricanrana takes Garcia down and Andretti kicks him off the apron. There’s the big running suicide dive but Garcia blasts him with a clothesline.

We take a break and come back with Andretti fighting back and hitting a neckbreaker. Andretti goes up so Garcia bails outside, only to have Andretti jump to the apron and hit a moonsault from the apron. Back in and a split legged moonsault gives Andretti two and they trade kicks to the face.

A torture rack neckbreaker gives Andretti two more but Garcia is back with a pumphandle slam for the same. Andretti catches him with an elbow in the corner though and a top rope corkscrew crossbody drops Garcia again. The running shooting star press finishes for Andretti at 10:37. 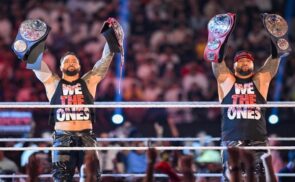 The Idea: More On WWE’s Plan To Split Up Usos’ Tag Team Titles