We are done with Hard To Kill and that means it is time to go through the fallout period. The big story coming out of the show was Mickie James ending her Last Rodeo by defeating Jordynne Grace to become the new Knockouts Champion. Other than that, Josh Alexander is still the World Champion, having defeated Bully Ray in Full Metal Mayhem. Let’s get to it.

In Memory Of Jay Briscoe, with Tom Hannifan giving a brief voiceover about thoughts and prayers being with the Briscoe family.

Here is Mickie James to get things going. The Last Rodeo may be over but Hardcore Country lives forever…and Bully Ray interrupts. Ray tells her to get out but James tells HIM to get out. Ray: “You were not in the main event of Hard To Kill.” Fans: “YES SHE WAS!” Ray insists that HE was the main event, not he and Josh Alexander. The reality is that no one cared about this place until he got here four months ago. James says the only headline she saw was BULLY RAY TAPPED OUT!

That doesn’t sit well with Ray, but Mickie keeps going about how Bully is just a bully who politics his way to the top. She knows how he feels about women in wrestling, so if he wants to, get rid of her. Cue Tasha Steelz and Savannah Evans, the former of which wants to see Ray go upside James’ head. Steelz says Mickie started the Last Rodeo because she can’t beat Tasha Steelz, which earns her a shove from James.

The challenge is thrown out (with Ray egging Steelz on) but Evans decks James. Ray grabs the table, which draws out Jordynne grace and Frankie Kazarian for the save. Cue Santino Marella to make a match, but he has to do math to figure out the right one. Cue…..ERNEST THE CAT MILLER of all people to say that since he used to be WCW’s Commissioner, he can offer some advice. The six person tag is made.

Steelz slugs away at grace to start before it’s off to Evans, who gets sent into the corner. Grace wants Ray, but the distraction lets Evans jump her from behind. That doesn’t last long either so it’s off to James for a nice reaction. Evans drops James as well but a hurricanrana out of the corner is good for a breather. Ray pulls James down from the apron though and we take a break.

Back with Ray slamming James and laying on the mat to add the trash talk. Steelz comes back in and we hit the chinlock but Mickie is back up again. Another kick sends James back into the corner though and the beating continues. A quick roll out of the corner gets James over to Grace, meaning house can be cleaned. Ray goes after Grace, who fireman’s carries him without much trouble. Kazarian comes in and hammers on Ray but James gets the tag, setting up the top rope Thesz press to finish Steelz at 13:57.

Post match here is Masha Slamovich to give James the death warrant.

Santino Marella talks to Ernest Miller in the back and talks about a six way match with all former World Champions (Moose, Eddie Edwards, Sami Callihan, Rich Swann, Rhino, Chris Sabin) to crown a new #1 contender to Josh Alexander for No Surrender. Marella goes over to Dirty Dango but Steve Maclin interrupts. He wants to know why Rich Swann, who Maclin beat at Hard To Kill, is in the #1 contenders match. The result: Dango vs. Maclin tonight.

Purrazzo hammers her down to start and works on the arm, setting up the surfboard. A suplex gives Purrazzo two and a backbreaker gives Purrazzo two, as she pulls D’Amboise up. That’s enough to let D’Amboise get in a knee and a running flip neckbreaker. Purrazzo isn’t having this and hits a powerbomb into the Queen’s Gambit for the pin at 4:21.

A nervous Gia Miller goes to see PCO in the bowels of the building. When asked what is next, PCO screams a lot and shakes the cage wall.

Trey Miguel comes in to see Ashley D’Amboise and praises her skill, but she needs to hit the gym a bit more. D’Amboise: “Thank you.” Miguel: “Was that disrespect?” They argue until 73 year old Mike Jackson comes in to issue a challenge for title match next week.

They do the creepy looks at each other until Wilde armdrags her into an armdrag. Back up and they trade shots up against the ropes with Wilde getting the better of things. A suplex sets up a guillotine choke to Kelly but she’s back up with forearms to the face. Wilde shrugs that off and hits a Codebreaker but gets sent to the apron. Kelly charges and lands in kind of a jumping Pedigree for a heck of a crash. That just makes Kelly smile at her and fire off some headbutts to take over. A quick Wilde Ride gives Wilde two so they trade rollups, with Kelly pulling her into the Killer Klutch for the tap at 7:15.

On Before The Impact, Deaner made Sami Callihan take out an injured Delirious.

Deaner says that Callihan has to go through a seven step process and he has gone through two in a row. Next week, he is in the Golden Six Shooter #1 contenders match. Step three: win the title and bring it to the Design.

Josh Alexander tells Santino Marella that he is fine with the #1 contenders match. Gisele Shaw and Jai Vidal come in, with Shaw saying she is owed a Knockouts Tag Team Title shot but needs a partner. Various women walk by and turn her down without as much as a second thought but Vidal seems interested.

Maclin starts fast and knocks Dango around the ring, only to have Dango fight up and chop away. That doesn’t last long either as Maclin sends him into the ropes for a running crotch attack to the back of the head. A backbreaker gets two on Dango and we hit the chinlock with a knee in the back. Dango fights up and fires off more chops, setting up the Dirtbag Shuffle (dancing legdrop). The top rope legdrop is loaded up but Maclin bails to the ramp. That’s fine with Dango, who hits a dive to take him out. Maclin is fine enough to backdrop him into the ring though and after the spear in the corner, the KIA finishes Dango at 5:41.

The Major Players are ready for the Bullet Club next week. Moose comes up and says the Majors’ issues started when they lost to Joe Hendry. After they beat the Club, they’re coming for Hendry soon.

Busted Open Radio host Dave LaGreca sits down with co-host Tommy Dreamer to talk about their issues with other co-host Bully Ray. Both are upset with him but Dreamer won’t bring up their history together, including hooking Ray up with D-Von. Dreamer says he loses matches but not a war, and he’s going to war with Ray.

Pit Fight, meaning no ropes and you only win by knockout or submission. They both miss some kicks to start until King takes him down and they go with the grappling on the mat. Back up and Bailey grabs a throw, sending King down to the floor for a breather. King gets back in and kicks Bailey to the floor for a whip into the steps. Bailey is sent head first into a light on the ramp to knock him silly as we take a break.

We come back with King firing off some knees to the chest and then dragon screw leg whipping Bailey down. Bailey, bleeding a bit, kicks King to the floor for a break before striking away back inside. The cross armbreaker has King in more trouble but he powerbombs his way to freedom. Bailey is fine enough to grab another armbreaker, only to be dragon screwed to the floor again. King nails a dive and grabs a chair before dodging a kick, sending Bailey’s foot into the post.

The Figure Four goes on but Bailey is out, setting up a run down the ramp into a running dropkick to send King outside. Then, after kicking a post with his bare foot, Bailey climbs to the top of the post and flip dives onto King. Tom: “Total nonstop action here in this Pit Fight!” The Ultimate Weapon is blocked though and King spinebusters him onto the apron. A kneebar goes on as the fans find this awesome. Bailey uses the chair from earlier for the save the moonsault knees knock King silly. A stomp onto the chair onto King’s head is good for the knockout at 16:41. 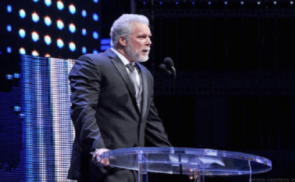