It’s a big show this week as AEW has suddenly started turning Rampage into something that matters. That means a World Title match this week, as Hangman Page defends the World Title against Adam Cole in a Texas Death Match. That could mean a possible title change and that means a nice feeling. Let’s get to it.

William Regal joins commentary as Austin punches Yuta in the face to start. Yuta ties the legs up and hammers away before putting on a leglock. It’s off to Danielson to tie up the legs and rip at Colton’s face, setting up a surfboard. Billy comes in and elbows Danielson in the face to cut him off as we take a break.

Back with Danielson hitting his way to freedom so Moxley can come in to clean house. Everything breaks down and Yuta hits a high crossbody. Danielson adds the running knee to Colton but Billy’s double clothesline breaks up the double dives. A powerslam gives Billy two but Yuta is right back with his bridging rollup for the pin at 9:04.

The guy, whose name couldn’t be heard over the crowd, hits a missile dropkick at the bell but Butcher doesn’t go down. A running clothesline in the corner sets up a powerbomb for the pin at 53 seconds. Shawn Spears, on commentary, approves.

Dustin Rhodes talks about how he has been on this final run for a long time now and it is time to get one of his bucket list matches. He wants CM Punk next week on Dynamite.

Soho hammers away to start but gets sent into the corner for the handstand in the corner. That lets Renegade get in a superkick to take over and the camel clutch goes on. We take a break and come back with Soho hitting a suplex and starting to get fired up. Soho sends her into the corner but gets hit in the eyes, allowing Robyn’s twin sister Charlotte to switch places with her.  Soho’s top rope backsplash hits knees and she hits No Future to send Charlotte to the floor, where the twins switch places again. A swinging Downward Spiral finishes Robyn at 8:23.

Hangman Page calls Adam Cole a thorn in his side and promises to end things tonight. Cole says tonight is going to be the worst night of Page’s career and it’s time for the main event.

Page is defending in a Texas Death Match (Last Man Standing). Before he even gets in the ring, Page starts throwing in chairs before knocking Cole down and going after his leg. They head outside with Cole being knocked around the ring and sent into the required table. The beating goes into the crowd with Page knocking him around the arena, though he does stop for a beer. Cole gets knocked back into the ring, where Page takes a chair to the top.

After head faking Cole to avoid the superkick out of the air, Page moonsaults down onto him with the chair for a five count. Page knocks him to the floor where Cole is busted open as we take a break. Back with Cole using a chain, which is tied to the top rope, for a clothesline to take over. Some chairs are set up but Page hits a Death Valley Driver/AA onto the tops of said chairs for the big knockdown.

The Deadeye on the pile of chairs sends Page outside, with Cole going up top. The huge moonsault is superkicked out of the air for a seven count, setting up the Panama Sunrise onto the chairs for eight. Page fights back up and they sit down in the chairs for the slugout with Cole getting the better of it. Cole picks now to yell about how Page will never be Kenny Omega, earning himself the Buckshot Lariat.

Page uses a belt to tie Cole to the top rope before pulling out a barbed wire chair. Page can’t use it though and Cole gets out for a low blow. That isn’t enough for the win so Page wraps some barbed wire around his arm. Cole goes up, only to get knocked back down, with Page wrapping the barbed wire around Cole’s head. The Deadeye off the apron through a table at ringside retains the title at 20:05. 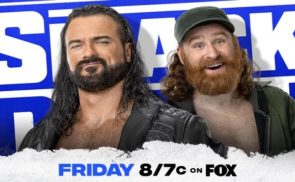