Who are you again? WWE has an odd history of changing wrestlers’ names out of nowhere. Sometimes it means that a wrestler is going to another roster, but other times it means that WWE has just changed their minds about something. Neither of them are exactly great reasons, but WWE loves to make the moves. That is what they have done again with a bit of a surprising name.

According to his WWE.com profile, Raul Menoza’s name is now Cruz del Toro. The name was used this week on NXT during del Toro’s appearance in a tag match, though there was no formal announcement was made. There is no word on why the name change was made and nothing to suggest that del Toro is on his way to the main roster. His Legado del Fantasma’s teammates names have not been changed.

Opinion: I’m not sure why WWE made this change and I would actually be surprised if they had a concrete reason either. The name changes have been coming rather quickly as of late and I don’t know how much good they are going to do for anyone. Raul Mendoza doesn’t really sound any better or worse than Cruz del Toro but I’m sure WWE thought that it was a necessary change for whatever reason.

What do you think of the change? What can del Toro do in NXT? Let us know in the comments below. 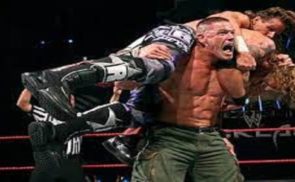