We are coming up on Fyter Fest and that is going to have very little to do with this show. As usual, this show is probably going to be rather lengthy and feature several not so competitive matches between mid and lower card names. Somehow this show keeps getting longer and I’m not sure why. Let’s get to it.

The Vices (Sin and Money) are dressed as Freddie Kruger. Money takes Boy into the corner to start but gets taken to the mat amateur style. It’s off to Stunt vs. Cruz with Stunt dropkicking him into the corner. Money comes back in and gets beaten up in a hurry.

Luchasaurus wrecks everyone in front of him and it’s Stunt’s splash into Boy’s Swanton for two. Sin gets in a Flatliner on Boy though and Money adds a springboard legdrop for one. The comeback doesn’t take long though and it’s Luchasaurus coming in to clean house again. The Tail Whip to Cruz sets up a tiger suplex to give Boy two and Stunt dives onto the Vices. Extinction Level Event finishes Cruz at 6:21.

Christopher Daniels/Kazarian for SCU here and Leva Bates is with Avalon/Cutler. Avalon and Kazarian start things off with the latter shoving Avalon down for an armbar. Back up and Kazarian avoids an armdrag attempt, setting up another armbar. Taz on Avalon and Cutler’s losses: “They’re basically sucking thus far.”

Daniels comes in for a wristlock on Cutler, who gets away and hits a springboard forearm (probably giving Daniels some flashbacks). It’s back to Kazarian for a gutwrench suplex but Avalon gets in a cheap shot on Daniels from the apron to take over for the first time. Cutler mixes things up with a bottom rope springboard to knock Daniels outside where Avalon runs him over again.

Back in and Daniels gets over for the tag without much trouble so Kazarian comes in to clean house. Avalon cuts him off with a flapjack and Cutler adds a springboard elbow for two. Kazarian kicks Cutler down though and Daniels comes in with a middle rope stomp to the chest. The slingshot into a cutter only gets two with Cutler making the save. Cutler is knocked to the floor and Celebrity Rehab finishes Avalon at 8:04.

Swole is rather fired up here and plays to the crowd well. Before the match, Swole grabs Jordan’s Burn Book and doesn’t like what she sees inside. That’s enough to start a fight so Swole dropkicks her down. Jordan kicks at the knee though and pounds away on the floor. We hit the chinlock but Swole is up in a hurry with a headbutt. A cutter into a fireman’s carry knee to the face sets up Dirty Dancing to finish Jordan at 2:24.

Leva Bates has a plan for Cutler and Avalon but they come in to argue about who is worse. The team splits and Bates is stressed.

Ali is making his debut and seems to like seeing his name on the video screen (you can’t blame him). Archer runs over the video production guy to continue his trend. Jake Roberts looks annoyed as he goes to ringside and Archer runs Ali over to start. The rapid fire forearms to the chest keep Ali down and there’s a hard shot in the corner.

The running elbow drops Ali again and he is trying to pull himself up on the ropes. Something like a Rock Bottom out of the corner puts Ali down yet again and some kicks to the ribs knock him to the middle. The Blackout connects but Archer pulls him up at two. Instead the EBD Claw finishes Ali at 4:24.

Joey and Sonny hug before the match and it’s Sonny knocking Musa around to start. A handspring kick to the head sets up a Boston crab with Janela adding a legdrop to the back of the head. There’s a running spinwheel kick in the corner and stereo missile dropkicks drop Dean again.

Dean comes in and here is Archer, with Roberts having to hold him back. The distraction lets Dean get two off a dropkick to take over on Sonny. A dive through the legs allows the hot tag to Joey though and house is cleaned. Another handspring kick to the ribs in the corner has Musa in more trouble and Sonny dives onto Dean. Joey’s super hurricanrana sets up Sonny’s splits splash to finish Musa at 4:49.

The Natural Nightmares are here with Brandi and Allie. Velvet is “straight out of your mama’s kitchen”. Isn’t Brandi the one with a cooking show? Allie jumps Page before the bell and since the referee doesn’t pay attention, we start in a hurry. A running knee drops Page again but she forearms Allie into the corner. It’s off to Velvet, who gets caught in a swinging neckbreaker from Allie for two.

Brandi comes in for a low superkick for two of her own and adds in Dustin Rhodes’ kneeling uppercut. Allie gets knocked to the floor though and it’s QT Marshall rushing over to check on her in a hurry. Page gets in a cheap shot but her chinlock is broken up in a hurry. Brandi starts the comeback with a Sling Blade but Allie tags herself in after Brandi hits a spear. That lets Allie, who seems fine, get the easy pin at 5:08.

Tully Blanchard is here with Spears. Johnson goes for a hammerlock but gets driven into the corner for an elbow to the face. The running knee in the corner lets Spears throw him outside but Johnson switches places. A suicide dive is blocked with a shot to the face though and Spears drives him back first into the apron. Back in and Johnson strikes away, including a running basement dropkick. The C4 doesn’t work for Spears but he grabs a Sharpshooter to make Johnson tap at 4:21.

That would be Evil Uno and Stu Grayson, who are back in the country. The rest of the Dark Order, minus Brodie Lee, watches from the stage as Grayson drives Skyler into the corner. Uno stomps him down and a running shoulder to the ribs makes it even worse. Skyler fights back so Uno pokes him in the eye to cut that off in a hurry.

More stomping in the corner has Skyler down but he fights out and rolls over for the hot tag to Pierce. A few shots to Uno set up a neckbreaker/middle rope stomp combination for two but Grayson is back in. That means a powerslam into a Swanton for two with Pierce making the save. With Skyler down, the Fatality finishes Pierce at 4:02.

Post match, Brodie Lee comes out to approve of the win.

Garrison has wrestled in Ring of Honor as part of the Master and the Machine. Havoc headlocks him to start and then takes him down by the wrist for a stomp to the arm. Garrison grabs one of his own but charges into a boot in the corner. They head outside where Havoc chops the post by mistake. It doesn’t seem to matter much as Havoc Japanese armdrags him into the corner and chops away for a bonus. The Acid Rainmaker is blocked so Havoc kicks him in the head and connects on the second attempt. The fisherman’s DDT finishes Garrison at 5:58.

Kip Sabian (and his dog Oscar) is here with Ford. Moore drives her out of the corner to start and Ford shakes her shoulder a bit. Back up and Ford sends Moore face first into the buckle before choking on the rope (including a kiss to Sabian). Ford’s handspring shoulder in the corner is countered into a sunset flip for two and a gutwrench suplex is good for the same. That just earns Skyler a Lethal Injection and the fisherman’s suplex gives Ford the pin at 4:12.

Sky goes for the arm to start so Anthony wrestles him down. The chinlock is reversed into a quickly broken armbar into a standoff. Anthony pulls him into a hammerlock and Sky can’t get out so fast this time. Back up and Sky shoulders him down, setting up an armbar as the arms race continues. Sky’s jumping elbow to the face gets two but Anthony is right back with a tilt-a-whirl faceplant.

An elbow to the face sets up a chinlock, then a boot rake to the face, then another chinlock. Sky fights up and hits some clotheslines, plus the jumping double stomp to the back. Anthony’s TKO is blocked so he grabs a Death Valley Driver for two instead. Sky doesn’t like the near gimmick infringement and kicks him in the face, setting up the TKO for the pin at 9:37.

Dynamite preview wraps us up. 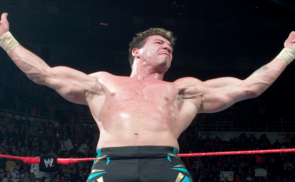 RUMOR: WWE Has Found The Next Eddie Guerrero